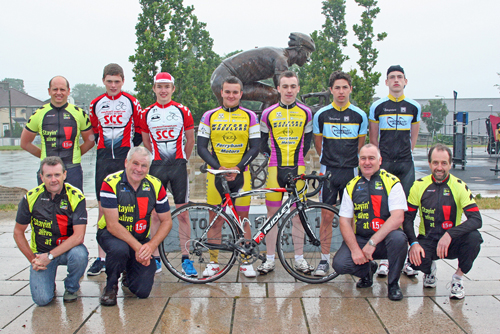 Photo – Back: Frank O’Leary, Reece Young, Fionn Jordan, (both Slaney CC), Ryan Byrne, Odhran Stynes, (both Wexford Wheelers), Matthew O’Gorman, Cian Kehoe, (both SERC)
Front: Phil Skelton, Micheal Considine, Nicky Stynes and Bill Jordan.   (Photo credit – Liam Ruth)
A number of cyclists from across the county are putting final preparations for a series of races in Holland and Belgium next week. Six cyclists, all under 16s, were chosen to take part in three races, two in Belgium and one in Holland, and will jet off on Monday.
The trip is the result of an idea by Frank O’Leary, former Cycling Ireland coach and well known racing cyclist, who organised a series of training camps around Wexford during the winter months. From the camps, the cyclists were chosen and are said to be hugely excited for to opportunity to cycle in the “heartland of cycling”.
Bill Jordan, Slaney CC, who will be accompanying the teens, said they were also looking forward to taking in a stage of the Tour de France which will be taking place at that time.  “They are really starting to get excited now. They’re 15/16 years of age and have been busy with their Junior Cert recently but are now 100% focused on the racing”
He added “They’re also conscious of the fact the the racing is at a high standard over there. Eddie Merckx is from Belgium and he’s regarded as one of the greatest cyclist of all time so thats the kind of standard set”
The group will compete in one last race at home in Davidstown, just outside Enniscorthy, on Saturday just before boarding their flight and will spend a week in Europe.
Mr Jordan said he wanted to thank anyone who made the trip possible, as well as the three cycling clubs, South East Racing Club, Slaney Cycling Club and Wexford Wheelers for all their support. He also thank Phil Skelton, head of the Stayin’ alive at 1.5 campaign for highlighting the importance of cycling safely to the boys. 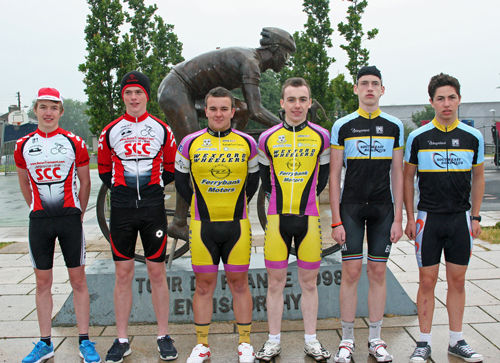