Well done to Murry McDonald who came out on top in our winter touring league. Murry was presented with his prize, a Minoura home trainer, by touring league sponsor Paul Nolan at Kenny for Bikes this morning. 2nd place was taken by Mylie Kavanagh while Mick Byrne took third and both were presented with gift vouchers by the club. 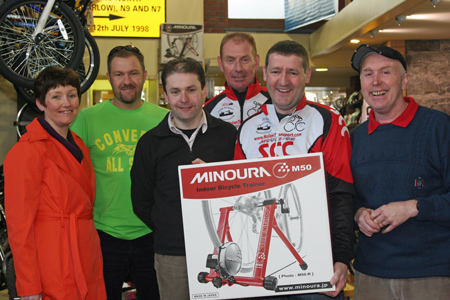 Full results are on the touring league page. We had a large number of riders out over the winter and hope to continue this trend now the good weather (?) is here. The club would like to thank sponsor Paul Nolan who also finished joint third in the table. A new summer touring league will commence after Easter until the end of August. Remember tours are from the Duffry Gate every Sunday leaving at 10.00am SHARP.

KARE and Naas Cycling Club are hosting a Leisure Cycle tour on April 19th, with routes of 100km and 50km, and a 20km cycle ideal for families. Every one who pre-enters before April 6th will be entered in a draw for a Cycling jersey signed by the 4 members of the 1987 Irish Cycling team Sean Kelly, Martin Earley, Paul Kimmage and of course the World Champion ,Tour de France and Giro D’Italia winner from that year Stephen Roche .