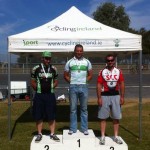 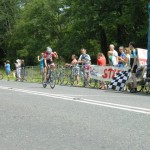 Underage report from Bill Jordan: What a weekend of sun, hard racing, trills and spills at the Arklow underage 2day for the Slaney team of Mark, Elliot, Reece, Adam and Fionn.
The lads all rode so well and seemed to be constantly up the road, trying to get up the road or defending a team mate that was up the road.
Elliot took 4th place overall in the under 12 which was really fantastic as he suffered two crashes on saturday afternoon and had to get patched up in the ambulance before going home.
Mark finished the the two days well which was a great performance considering he has only just returned to racing and this should really help him build for bigger things to come.
The highlight for the team was when Fionn won on his own in Sundays u16 road stage, helped in no small way by Adam and Reece, he attacked at the start of the last lap and riding strongly was never caught. The win helped him claim the overall u15 prize aswell.
Thanks to SERC for the event and well done to all the other Co. Wexford riders that rode so well all weekend.

Meanwhile Davy Walsh was competing in the National Omnium Championships at the velodrome in Sundrive Road and won the Bronze medal. Despite only putting together a track bike and beginning on the track in May Davy had a great weekend competing in the six events over 2 days. With the Flying lap, Points race and Elimination race on Saturday, today brought the Pursuit, Scratch race and Kilo. At the end Davy finished in Bronze medal position, a remarkable result, and a sign of what he might achieve going forward.