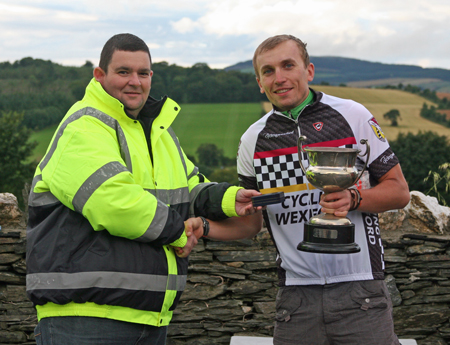 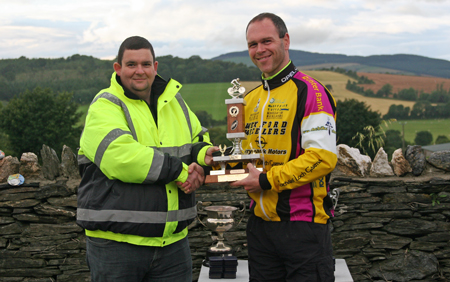 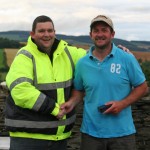 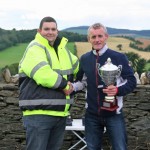 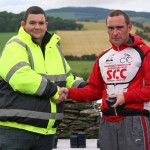 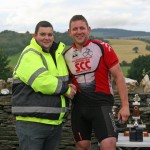 About 40 cyclists took to the line on a typical 2012 summers evening – ie we only had about 8 showers during the race! With safety worries over available light the riders were offered an option of sticking to last years 3 and 2 lap (75km and 50km) format which they chose rather then the proposed 4 and 3 laps.  While the A4 race stayed more or less together for a sprint finish, the main race had plenty of action with a large group including the eventual winners, opening a gap of a minute over the chasing group on the first lap. By lap two the chase group was reduced to a trio of Greg Demspsey, Barrow Whls and Conchubhar and Murt, Slaney who were chasing hard and eventually made contact with front group. At the 5km to go turn on the final lap Martin Mizgajski and Declan Kinch had about a 20/25 second lead over the chasing group lead by Davy Walsh. Davy left his group to eventually beat Declan Kinch at the finish but not before Martin had sealed his 2nd County Championship win.

Well done to main organiser Derek Webb, his drivers Dave Maguire and Mick Foley and all the marshalls who helped and to the spectators at the finish. Rather than share out the entry fee in prize money it was agreed by all to keep the proceeds of the race to go towards purchasing a defibrillator and training which be available to all the clubs to have at their league and open races. The County TT medals will be presented at a forthcoming Slaney TT. Guided tours of Dereks new van proved very popular and will be available again on thursday night in Camross!

No pictures as I was marshalling but presentation pictures are on http://pix.ie/LiamR and hopefully Ronan’s video camara picked something on the finish line by remote control as he was marshalling 5 miles away!