Leinster Underage Training Camp (from Bill Jordan). Due to illness, Fionn was the only Slaney rider to attend the Leinster underage training camp today in Bray. Wexford was well represented however as the wheelers and southeast road club had riders in attendance.
On a dry, except for the odd snow flake, but very cold day, there was a big turn out of over 70 riders half of which were in the under 16 group.
The under 16 group travelled down the main road to Rathnew and then returned to Bray via the coast road. The pace was reasonable enough down to Rathnew but once the turn was made this changed some what or I just got slower! There was a lot of up and down on the way back with the final push being made up the longish climb at Greystones before the descent back in to the finish at the Bray wheelers club house.
I’d like to give a report on the events on the final climb but from my vantage point all I could see were the tail lights on the support car!!
All made it back in one piece and following a change of cloths and a cuppa the lads had a talk from cycling Ireland and cycling Leinster and were on the road home just after 2pm.
Thanks to Ger and the lads for putting it together and looking forward to the next one.

Forecast very cold so wrap up well. If weather really disimproves updates will be posted here.

Cancellations:  Saturdays beginners ladies spin meeting in Donohoes garage is cancelled due to expected icy conditions but will take place the following week.

The group training ride for the 2013 racing crew planned for saturday has been postponed due to uncertainty with the weather and unavailabilty of some members. Revised date to follow.

Coaching: Pat Whitney held a coaching session with some members of Racing 795 in Donohoes on saturday morning. Despite the wintry conditions an enthuiastic group of 6 men and 6 women had a productive couple of hours on the bike. The session was good craic and Slaney would like to invite any members of Racing 795 who wish to take part in any of our club spins or activities to join us any week. 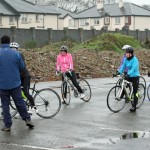 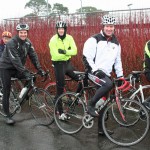 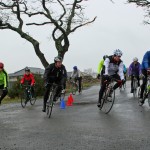 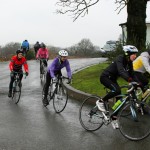