Many thanks to everyone who played any part in making the running of the races successful & safe. Thanks to all our marshalls who drove lead cars, 2nd lead cars or the commisaires, or who stood for 3 hours on junctions. Special thanks to Derek, Ronan & Jason from SERC and Paddy Kinsella from Wexford Whls who helped out at short notice. Fergal Redmond and Sam Darcy were our motorbike marshalls and it was a hot day in leather! Thanks to Paddy Redmond and the Red Cross crew for their professional handing of a potentially serious race crash (Regina Cunningham from Longford was taken to Wexford hospital but released last night). Without Frank Gibson and his photo finish equipment it would have been impossible to sort out the final positions and Oliver McKenna came to our rescue with the race radios. Thanks to our commissaire team of Eddie Dawson, Colm Rigley and Larry Farrell (who was also at our youth races on Saturday). Pat Whitney & Maire Ruth dealt with a rush of over 170 riders for sign on. Mick Byrne & John Butler were on the course from 8am erecting direction and safety signs and then driving in race. Thanks to HWH Bunclody GAA club for the use of their facilities. Finally our race sponsor The Riverside Park Hotel have supported this event since its inception and we thank general manager Mr Jim Maher.

Without riders we’d have no race so we hope you enjoyed the event and will be back to bring more high class racing to the south east next year!

Many thanks to all who took part. Pictures uploaded later

We had great racing on the Davidstown circuit on Saturday morning. Although numbers were small we had riders from as far away as Westport, Drogheda and Newbridge take part. Local riders had success in the U12 & U14 while the U16 race gave us a mass bunch sprint across the road that would grace the Champs Elysee! Slaney had a 1,2 3 but not in the same race -Adam won U14 with Ryan 3rd while Daragh was 2nd in U12. Thanks to lead cars, Mylie K and David D, Mick drove commissaire Larry Farrell. Peter Thatcher, Frank Dunne, Davy Hynes and Tonto marshalled with the help of Stephen Flood, Billy Roche and Nicky Stynes while Sam Darcy was on motorbike duty. Finally Ann Jordan and Mary Ruth put on a mini Mount Leinster Challenge feedstop that went down very well! 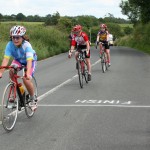 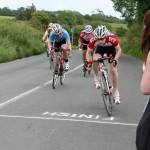 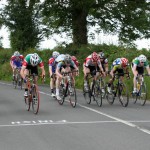