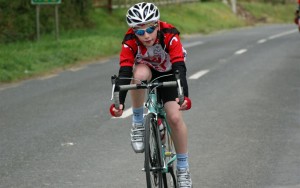 Slaney CC had riders racing in Balbriggan, Palmerstown, Limerick and Mount Leinster today! Adam Thatcher was the first Slaney CC winner of the year with a great 1st place at the youth racing U/12 event in Palmerstown. Adam finished ahead of 2nd placed Reece Young, another promising youngster from South East Road Club, and also ahead of the reigning Irish champion.

Paul Bolger took a fine 4th place in the A4 race at Balbriggan today. Paul won the novice section of the county championships last year but certainly won’t be allowed in this year! Improving all the time, his first races were in our novice league last year and this was only his second open race.

Alex Williams, Murt Doyle, Frank Dunne and Alan Galavan raced the A1/A2 event which attracted the cream of Irish cycling to the tough 75 mile event on a very testing course. While Frank was hampered by a lack of racing to date all rode well with both Alex and Murt prominent through out the race and Alan finishing 17th overall and 7th A2. Meanwhile Stephen and Shane Kelly made the long trek to Rás Luimní and competed well but were outside the prizes. This was Alex, Murt and Franks last event before heading to Kerry next weekend for the Rás Múmhan, while Alan Galavan will be leading the Gorey 3 Day team.

Finally, Paul Nolan and Mick Byrne left the 23mm tyres at home today to take part in the Racing 795 XC MTB event on Mount Leinster today. Not sure how they got on yet – hopefully they are not still riding around the forest on Kilbranish!

EDIT: Just wanted to add that Slaney’s Willie McDonald from Carlow, who has been riding the Irish Veterans Cycling Assoc. league races for the past few seasons, took a great 2nd place in the first IVCA race of the season in Warrenstown, Co Meath (?) on Sunday.  Also to mention that Ken Blanche was part of the Slaney crew in Balbriggan taking part in the A4 race with Paul Bolger. Paul Nolan completed the MTB race on Sunday but Mick Byrne was a DNS after an unfortunate timing incident (forgetting to putting the clock forward!)