The 2010 touring season finally kicked off today with a big group heading up the N11 to the Berry farm roundabout north of Gorey and back. With the back roads in seriously poor condition we may be forced onto the main road for the foreseeable future. The recent lack of cycling seems to have liitle effect on some guys (turbo….hmmm) and according to my computer we clocked about 70km at 27.4kph avg. Good to see Mick Howe on his maiden tour although he was tempted to join the Rás training ride!   Touring league 2009 2010

The Rás training group went south along the N11 to Wexford, on to New Ross and then back along the same route to town covering about 100km with Frank Dunne and Martin Gill probably getting a little extra in as they cycled up to the start in Enniscorthy. The aim at this stage is for long steady miles although the pace was picked up on the run back to Enniscorthy with a fast up and over session thrown in. Pat Whitney had drinks and spare wheels etc and was able to sort out punctures quickly and keep the session going. A group meeting for riders & backup crew is planned for the Loch Garman hotel, Gorey on Monday at 8.00pm. Pat & Derek were on SE radio on saturday night discussing the Rás participation and the continued rise of cycling in the county. 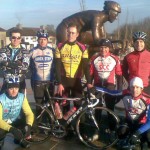 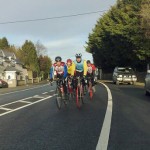 We’ll have a more detailed post on Rás preparations in the coming week including news of an upcoming sportive ride planned for March 13th where all cyclists in the county will be able to show their support for Team Wexford.