Well done Ryan, Reece and Elliott – Slaney CC prize winners in tonights final SERC youth league race. Many thanks to SERC for putting on what by all accounts was a great race series. Thanks to Ronan for the photo.

Some great rides for Slaney at the Mullingar 2 Day this weekend. In the headline A1 race Frank Dunne continued his excellent form from the Nationals to take 11th on stage 1 and finish 8th overall on GC. Davy Walsh was 2nd in the TT only beaten by Irelands top ranked amateur rider Ryan Sherlock while on stage 3 all three Slaney riders finished in top 10 with Davy 6th, Conchubhar O’Crualaoich 8th and Frank 10th.

In the A4 race Ger Leacy showed no ill effects from his recent crash in Roundwood to take 8th on stage 1 and 10th on stage 3 and finish 25th overall with David Dempsey one place higher in 24th on final GC just 34 seconds off race winner.

Another good crew out on tour this Sunday which went to Blackwater, Curracloe, Wexford, Rosslare Strand and home. Great to have some new members out over the last few weeks. Welcome Chris, Peter and Barry. Chris had his first tour today, his longest ride ever and his first puncture. I’m blaming the dodgy bike Mylie loaned him!  Also good to have Ann, Ann and Sarah out this Sunday!

Kennys for Bikes Novice A4 league final round takes place this tuesday evening in Davidstown. Wexford Wheelers Stephen Duggan takes an unassailable 10 point lead into the final event. To spice things up for the last night we’re adding an extra lap so we can throw in a few cash primes of €20 for first over the line on lap 2, lap 4 and on the final lap 6.  For this last event can we remind riders that this event is for club licence and A4 riders only and while we love to see A3’s coming to support their team mates their will be no riding at the back of the bunch allowed this week. 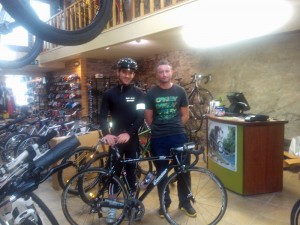 Paul Nolan had new Irish criterium champion Felix English in the shop a couple of times last week. Felix lives in Brighton but his Irish connections are in Wexford and he was home for the Irish National Champs in Clonmel and Crit champs inMullingar.  After his prime winning displays in the Waterford criterium league David Dempsey was able to gave him some tips!