Many thanks from the club for the effort Bill has put in since October with the training group, arranging routes and spins, encouraging and supporting the lads and then reporting back as PRO for the team! Its very much appreciated by everyone and I’m sure the group will be out as normal on Saturday or they’ll hear all about it! Another ever present on the training spins has been Bernie Dempsey and her support on the road is also much appreciated.

Very best of luck to all the lads taking part in Sundays training race. The cycling season is about to start!

Last weekend saw a good Slaney turnout at the Barrow 100km including this pair! 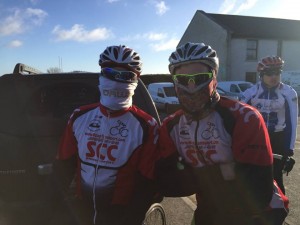 From Phil Skelton: Plenty of Slaney riders in New Ross today supporting our neighbours, Barrow Wheelers at the super fast sportive 100. Hope I leave nobody out:
Billy Harris, myself, John Redmond, Bill and Fionn Jordan, Murry McDonald, Warren Gillin, Ryan Byrne et Le Corky.
This is always an early season lung buster and didn’t disappoint on this occasion either. Some white frost in places made it a little hair raising at times along with the resurfacing in Inistioge.
Thanks to all at Barrow Wheelers

From Bill Jordan: We also had warren, who was looking strong and berni for back up car. from my point of view it was great to see lads that have worked so hard over the past few months doing what i knew they could do from the start. their confidence in the bunch and ability to move around in a controlled way was great to see. i also hope we have put a lot of our bad luck behind us as we had one cramp(john), one falling out wth a bad surface(phil) and two flats for fionn and corky, otherwise we would have been very well represented in the front group.

Just by way of explanation as to how i can say the lads are doing well because they rode, what after all is a sportive and not a race,.this sportive is 63miles long and the first 15appx are at a controlled pace of about 17mph but the front runners will have an average speed of appx 22/23 mph by the end as there are a lot of strong racers having their first run out for the new year….so do the maths as they say! the racing group plan to head for the first training race in gorey next sunday via a training spin on saturday, more details during the week.