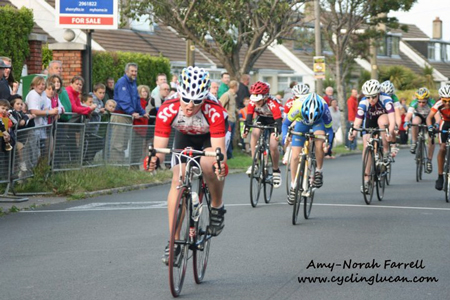 Ryan attacks the bunch with Fionn Jordan and Adam Thatcher just behind.

Criterium Success: Congratulations to Davy Walsh who took a great victory in the Portlaoise on Tuedsay and to Ryan Byrne who won the U14 race at the prestigous Stephen Roche GP on Wendesday. Frank Dunne was 4th in Portlaoise and Adam Thatcher 4th in Dundrum as well! 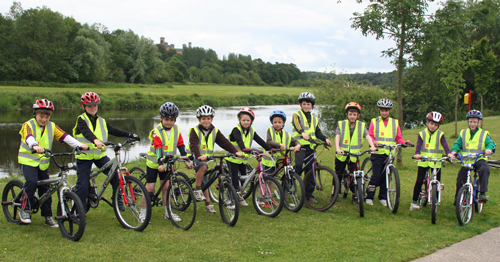 Great fun this morning on the Promanade with our family spin for National Bike Week. We did a few skills on the Promanade and then went on a spin down the Wexford road & back with the kids and parents before the goodies were brought out. The club was represented by Mick, Pat, Liam and Paul Nolan who did a pre spin safety check and also presented the kids with free water bottles.  On Saturday Pat was coaching at the National Sprocket Rocket day in Punchestown. Some pictures from BMX display below. MORE PHOTOS http://pix.ie/liamr/album/413457

Roisin & Conor have pointed out that I forgot to thank Pat for buying the punnets of strawberries for everyone on the spin. Pat, thanks very much for the strawberries, they were lovely! 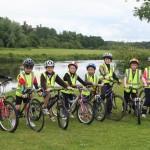 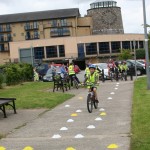 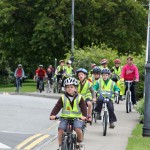 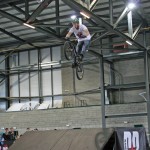 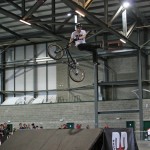 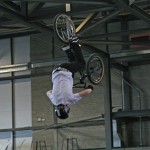 RACING: Some more good results on the racing side this weekend which saw Slaney riders perform well in Kildare, Roscommon and Cork. In the underage section Adam Thatcher had 2nd place in Kildare on saturday evening and a win in Cobh on Sunday while Ryan Byrne took 6th place in Cobh after been obstructed and held up by a boat. (Haven’t heard that excuse before – its a long story!).Fionn Jordan took 4th in the U14 in Kildare while Darragh Jennings took 4th in the U12. Alan Galavan continued his good form and took a fine 4th place in the Donomon GP in Roscommon. 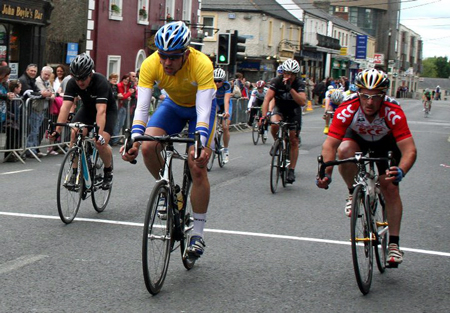 Finally Davy Walsh, riding in Slaney colours for the first time, took the best results of the weekend in the tough Paddy Flanagan 2 Day in Kildare. Finishing 9th on stage 1, Davy took 4th in the TT and after todays criterium finished the event in 5th place overall only 11 seconds off the winner. Thanks to Frank Dunne who did service for Davy on Saturdays 120km stage. Davy’s next outing will be the Nationals where he rides the Senior TT championship, Frank Dunne rides the Vets road race and Frank O’Leary rides the Senior road race.