Only the real hard men ( or sad individuals desperate for touring league points? ) made it to the Duffry this morning. Why let 4 degrees, rain and a northerly gale put you off. As you can see Mylie Kavanagh had dispensed with the energy drink and was well into a can of Dutch Gold! Paul Bolger arrived just after taking the picture and Murt Doyle dropped by on his training ride to Wexford. Updated touring league attached  Touring league 2009 2010 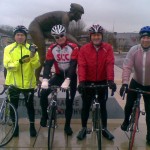 Yesterdays training spin went well apart from Tonto’s puncture fest and Pat Curry’s headset problems. The training spin will continue each Saturday at 9.30am. We’ll probably settle on one or two routes on half decent roads we’ll keep to each week.

Peter Thatcher is underage rep on the committee and along with Bill Jordan brought Adam, Fionn and Ryan to the underage coaching session in Arklow yesterday.  Many thanks Mick Considine and SERC for the invite.

Upcoming Events – just when you thought the season was over!