Novice Race This Thursday 3rd Sept. @ 7.00pm : The summer series of Underage TT’s ended last Thursday but we are hoping to have a couple of short sprint road races weather permitting before the evenings disappear altogether. 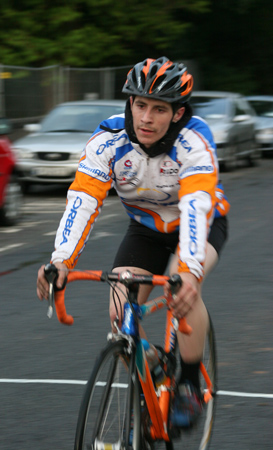 Thanks to the crew who turned up this evening to ride or help at the novice road race. We experimented with a lap of the long and then short circuit. From next week sign on, start and finish line & car parking etc will be outside Crossabeg national school. The light is fading fast so sign on from 6.30pm with a 6.45/50pm start. The circuit is 2.9miles long and the plan at the moment is half hour racing plus one lap with 3/4 more events to follow. If the evenings disappear we might look at a saturday of sunday morning?

The event is intended for new or infrequent racers to get a bit of experience, competition and craic and we’d love to see more novice riders out.

The much discussed ladies only tour, led by Rita Boyle,  will commence on the first Sunday in September on a trial basis. All abilities will be catered for and we’ve already seen a lot of interest in the initiative. More details closer to the event.

Wedding Invite! Ann & Bill Jordan have very kindly issued an invitation to club members to join them next Saturday evening to celebrate the marraige of Ann’s daughter Rebecca to Liam at the Mill Race Hotel, Bunclody. (Rumours that Bill has arranged a midnight mountain time trial from the hotel car park to the Nine Stones for the 2010 Slaney Marmotte Team have yet to be confirmed but bring bike and gear just in case!)

Underage coaching rides will continue every Saturday morning on the Wexford Road at 10.30am. Contact Pat @ 086 8172331 for details. 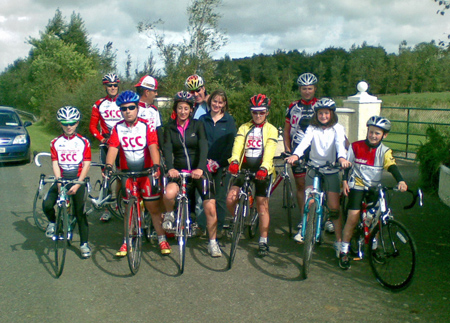 It was great to see Veronica Murphy back on the road again last Saturday when she brought Niamh and Rory on our underage coaching session. Veronica was one of Wexfords best lady riders, winning many races, and rode for the Irish national team in races in the UK and France. Neil Kelly, Ryan Byrne and Adam Thatcher were put through their paces under the watchful eye of coach Pat Whitney.

: Sean Kelly Tour of Waterford, Dungarvan. We didn’t get to ride with Lance during the week but on Sunday we had the chance to ride with one of Irelands greatest sporting legends. Slaney was well represented with Murt Doyle, Stephen Kelly, John Busher, Mylie Kavanagh, Tonto, Murry McDonald, Davy Hynes, Sean Kavanagh, Willie Roche, Paul Bolger, Bill, Ann & Fionn Jordan, Peter & Adam Thatcher plus mise. Thats who I saw -there may well have been more there – with 3,400 riders its hard to see everyone. The weather was miserable but it was a great day, good food and well organised. 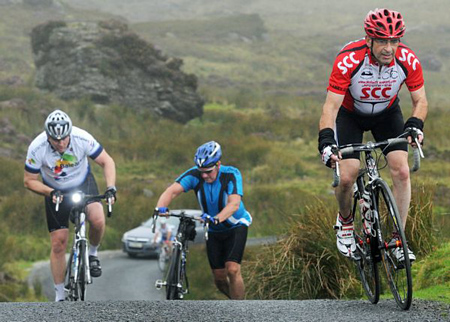 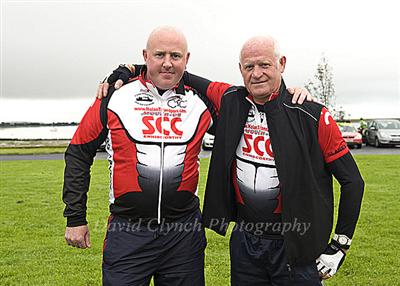 The queue for hair dryers after the SK Tour leaves Davy & Sean well pissed off.

email your caption to liamruth1@gmail.com

Licence Regrading for 2010 ; Cycling Ireland has issued the clubs with details of the new licence regrading planned for 2010. The changes intend to resolve the ‘supervet’ issues and provide a new licence grade for novice’s. All good ideas but some more work for race organisers! Have a read of the details here: license-regrading-2010.doc

Comeragh/ Altitude Cycle Summer League Prize Giving. Sinead Power has been in touch to let us know the prize giving will take place on Friday 4th September at 8.30pm in the Mansion House public house in Waterford. The Comeragh league is possibly the strongest and best run in the country with club riders mixing it with Rás riders & winners, current and ex pro’s and occasionly a certain former 4 times green jersey winner in the Tour de France! SCC’s Alex Williams & Frank Dunne are among the prize winners but all participants in the league and cycling supporters are invited to attend. Full results on the Comeragh website in the next few days.