We would like to send our very best wishes for a speedy recovery to Rebecca Jordan, Ann Jordan’s daughter, who is ill at present and undergoing treatment in hospital. Rebecca is an important and valued member of the Mount Leinster Challenge team in Kiltealy each year and we look forward to seeing her back on her feet soon. 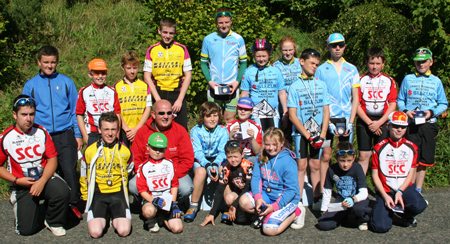 Well done and thank to SERC for a great underage championships this morning. Thanks to sponsor Derek Webb, Sprint Design and congratulations to our county champs Marc and Adam Thatcher, our silver medalist Neil Kelly and to Graham Hartnett, Ryan Byrne, Fionn Jordan, Faith Dempsey and Conor Ruth who all competed so well. 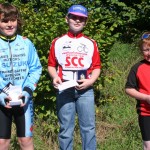 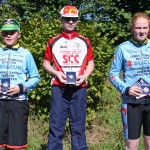 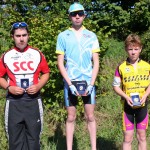 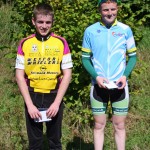 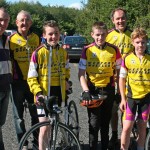 Frank O’Leary was the strongest of our riders today keeping an eye on every move that went away and trying several times to get a small group away from the large field but to no avail. Dan, Alan and Shane were all comfortable in the main field until a bad crash on lap 3 saw the road blocked with Shane on the wrong side of the peloton. The race was decided in the last 500m when the last break of the day was reeled in and Derek Cunningham, winner of the Falling Leaves Classic in Arklow a few weeks ago, attacked hard and just had enough strenght to hold off the Anthony Doyle at the head of the bunch. Declan Kinch was 5th, Mick Doyle 12th and Frank 13th. A blow by blow account of the race is HERE curtesy of David Quigley.

Stephen Kelly took 6th and Tonto Brady 8th in the A4 race. Paul Bolger launched a brave but fruitless effort for 3rd in the last 300m but finished in the bunch with Mike McLean and Mick Howe. With WW’s Gianni Ponzi 4th and Dave Allen 7th theWexford clubs took 4 of the top 8 positions.

Planning for next years Marmotte has commenced! Anyone who is interested in taking on the challenge next July need to contact Stephen Kelly NOW as accomodation is running out already. Contact Stephen on 087 2783226