The club sends its condolences to Marie Whitney on the passing of her uncle Lar Rigley, Patrick Street and to our friends in Sacre Coure boxing club on the sudden death of Paddy Murphy, St Johns, this weekend. RIP. 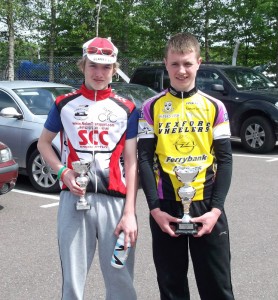 Underage Report from Bill Jordan: Great result for the boys of Wexford today in Blarney at the u16 race. Only two in the race, Seamus Sinnott from Wexford Wheelers and FionnJordan from Slaney. Seamus rode a great race to take his first win in an open race when he won a three man sprint. Fionn was disappointed to miss the winning break but persevered to take the best u15 prize. this was his first prize in an open race since last years Rs na nóg and hopefully will encourage him to work hard over the coming weeks as he tries to regain his form

Great group out this morning for the Sunday tour. Good to see some new faces out – your all welcome lads. Route was down to the Rosssalre roundabout in Wexford, back into town and out to Curracloe for a quick coffee stop. Then up thru Blackwater and Oulart direction.

Congratulations and well done to Davy Walsh and Frank Dunne who took the elite Silver and veterans Silver at the Leinster TT champs last night. Only two seconds off Gold for Davy and 12 secs for Frank. Fantastic ride after such a long haul to Dundalk. Frank is already looking forward to the 25mile champs!

When I took up cycling a little over 3 years ago, I remember asking club stalwart, Mick Byrne, what the toughest sportive, he had done was. His answer was the Mick Byrne Randonnee. On closer scrutiny I discovered that this was 200km in length with 3200metres of climbing done mostly on roughly surfaced back roads. Being a sucker for a challenge, I resolved to do it one day….
As I am a shift-worker, the day this was on, clashed with work each year…until today.
Got to Dalkey for sign on at 7:30 and readied the Ridley. There was a lovely atmosphere at the start buoyed by nice weather and nervous anticipation. Almost immediately after roll out, the climbs began, starting with the spectacular vista that is coastal Dalkey.
(I always hear Bill Jordan’s words in my ear at the early part of sportives, ‘get towards the front early because there, you’ll be less likely to encounter careless riding’).
Got chatting to a few cyclists who had done ‘the Gorey’, others were top of the range endurance athletes and some A3s. The company was really good and great conversations struck up. We worked really well as a group and kept each others spirits up. The climbing though was relentless with very few flat sections to speak of. The food stops (3) along the way, while not Kiltealyesque were well placed and the good humoured banter prevailed.
Rounding the Gap pub near Hollyfort a friendly light southerly helped our journey back to Dalkey. Lots more climbing awaited us including Sliabh Mann and Sally Gap. The final sting comes with 195kms in the legs with Vico rd. past Bono’s house on with some 10% gradient and of course the customary moment capturing photographer to record your pain.
I’ve done the Wicklow 200 twice and I think it’s a bit of a rip-off, trading on its name with a fairly hefty entry fee. Sign on for the Mick Byrne by contrast was €15 and is a tougher more challenging and better organised route altogether.
Keep it in mind for next year..
Phil 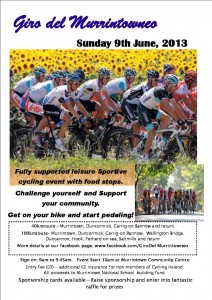 Two great pictures of Paul Nolan in the neutral service car at the An Post Rás. Paul is servicing Mehall Fitzgerald from Visit Nenagh in these shots. At first I thought he was just pulling up his socks but on second viewing I think he’s extracting a gel wrapper stuck in his rear derailleur! 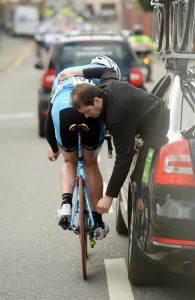 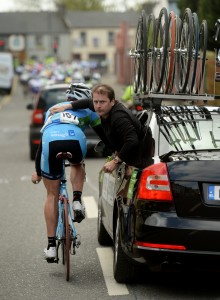 The photos were taken by Paul Mohan from Sportsfile, one of the pro photogs on the race.