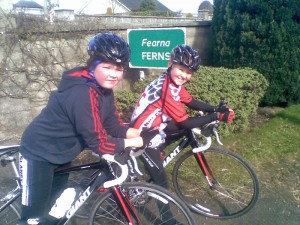 Liam & Darragh enjoyed their 1st ever group ride with the club on Sunday morning covering about 20 miles. The two boys, who had no previous connection with cycling, are graduates of the SUBWAY Sprocket Rocket course presented by Pat Whitney in Glenbrien national school. The lads are riding the two new road bikes the club purchased through Paul Nolan at Kenny for Bikes to provide young cyclists with a taste of cycling on a racing bike. The boys intend taking part in under 12/14  racing later this season.

Hopefully Liam & Darragh will be the first of many new, young cyclists the Sprocket Rocket courses will bring on.