More underage success today in Roundwood with Adam Thatcher and Ryan Byrne taking another 1,2 for the club. The lads were away for a long period of the race having forced a break and Adam took a great victory with Ryan recovering from overshooting the final bend to take 2nd. Well done to Wexfords Odhran Stynes who also had a great race finishing 4th on a very tough circuit. Darragh Jennings also took a great 4th place for Slaney in only his 2nd open U12 race. SERC’s Elliott Young was 2nd. Think the pressure is on the seniors to produce some results now! 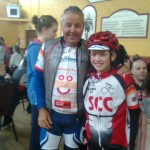 Fionn Jordan had a busy day on Saturday taking part in the Tour de Cure in Cork with none other than cycling legend Stephen Roche. Wouldn’t fancy his chances against Fionn in the mountains now….