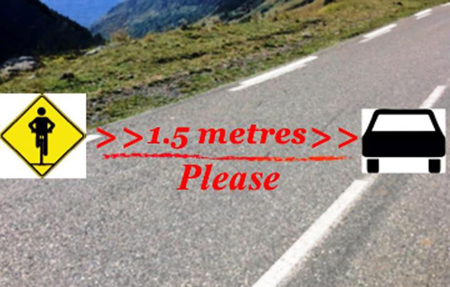 Continuing the share the road campaign Phil Skelton has launched a facebook page called “Stayin alive at 1.5“. The purpose of the page is to get as many cyclists, cycling clubs and cycling advocacy groups as possible to push for legislation to ensure motorists give a minimum 1.5m distance when overtaking cyclists. the Facebook page is at  http://www.facebook.com/pages/Stayin-Alive-at-15/491406574256697?fref=ts   It goes without saying that Slaney CC are fully behind Phil in this campaign.

We also welcome the latest Road Safety Authority advert – We all share the road.

I’m sure no one was left untouched by the recent tragic death of fellow cyclist Martin Mimnagh. As cyclists we are the most vulnerable of road users despite having equal rights with other traffic on our roads. Although many of us did not know Martin personally we could relate to his families loss and as cyclists understand fully the risks we encounter regularily on our roads.  Martin was the second cyclist to die on Wexford roads in the last nine months. In June 2012 a 48 year old woman cycling with her daughter was killed on the New Line Road, outside Wexford. The common theme in these two incidents was that the cyclists were struck while being overtaken by a vehicle.

Phil Skelton was moved to contact the Road Safety Authority to see what they were doing to educate drivers behaviour to make them more aware of vulnerable cyclists. Following some interaction with the RSA and some follow up research Phil wrote to Minister Vradkar to request action, as has happened in other countries, to legislate for a minimum safe passing distance of 1.5m when vehicles are overtaking cyclists. We will print the reply here when it is received.

I am attaching a summary of Phils contact with the RSA and a copy of his letter to the minister. I think it could do no harm at all if we all either printed, signed and posted this letter or a letter in your own words to the Minister or the RSA. Alternately just copy and paste into and email and send it to the Minister.

It can’t be too much to ask for 1.5m of road space to be given to a cyclist when being overtaken by a vehicle travelling at perhaps 100km per hour.

Synopsis of interaction between Phil Skelton and the Road Safety Authority

The ministers email address is minister@dttas.ie