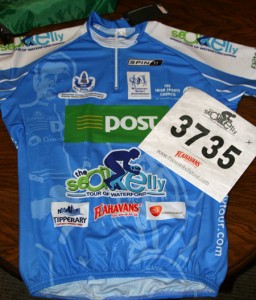 Best of luck and safe riding to the Slaney contingent at the SKT this year. Over 4,200 cyclists have registered for the ride tomorrow! On top of that there was at least a 1,000 on the family Kelly 10km ride this morning. Sean was at the start line at 11.30am and was still in the park signing autographs and getting pictures taken at 2.30pm before heading to the registration centre for the rest of the day. What a great ambassodor for our sport and we’re priviledged to have him. 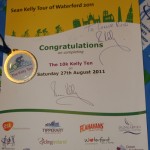 Really enjoyed todays Sean Kelly Tour. Never saw so many cyclists in my life! I’m probably missing names  I saw the 160km head out with John Busher at the front, (not far behind Sean Kelly & Inda Kenny!), Murry, (Murrys friend in the Slaney jersey?), Mick Howe, Andrew Dowse, Shane, Mylie, Phil. Didn’t see Sandra or David O’Connell but they headed out early. The 90km had Stephen & Neil Kelly, Terry Dempsey, Joe Fortune couldn’t come so he sent his brother instead!,  John Busher (he was multi-tasking!), and the dynamic trio of Davy Hynes, Willie Roche & Sean Kavanagh who left early and somehow managed to take a wrong turn and land in Carrick on Suir while trying to find Tramore and must have rode about 120km!