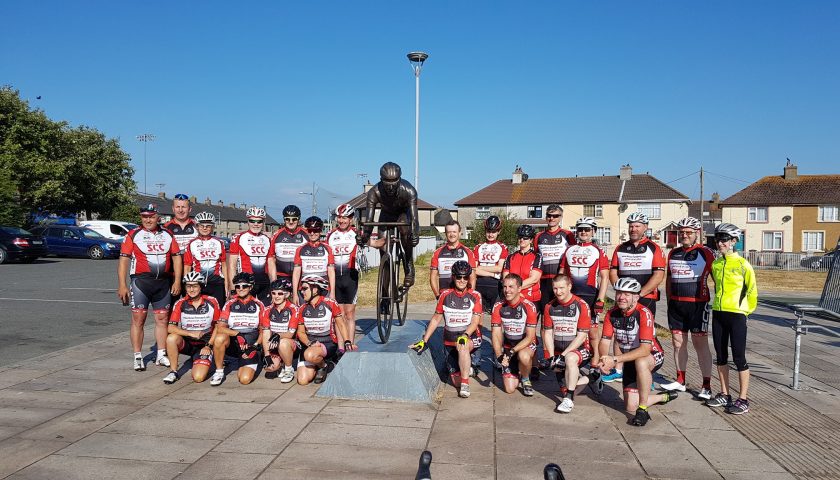 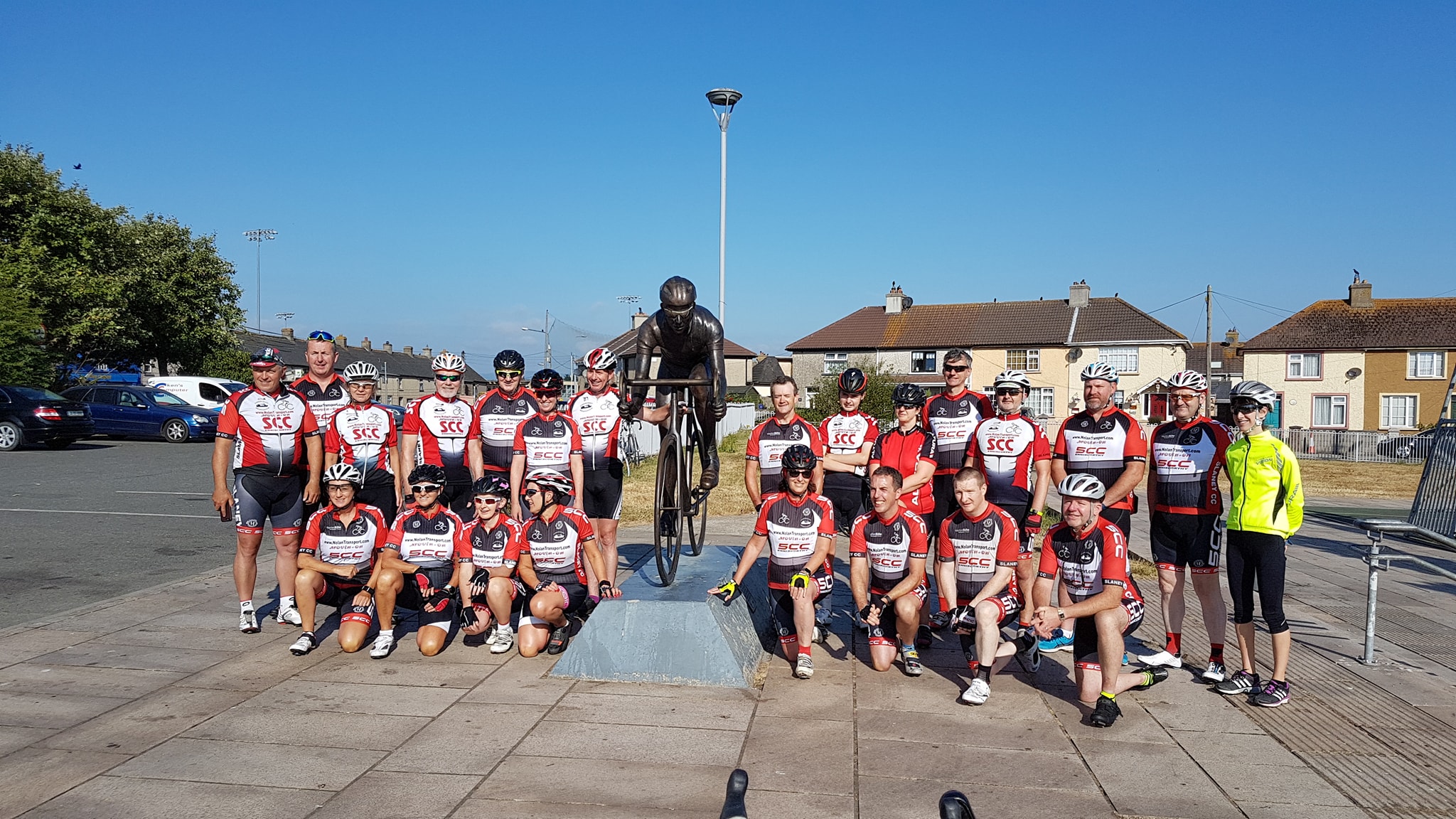 A large group of riders left town taking in the original route of the Enniscorthy to Cork stage of 1998. After heading out of town, the group split into two where Bernie Whelan led a strong group to Carrick on Suir while Phil Skelton led a group of 9 riders who planned to take on the route to Cork.

The Carrick group were ably supported by Rosemarie Mangan Harmon who looked after the riders with ice cold water and chairs which came in handy given the hot conditions. An early lunch in a fabulous cafe in Mooncoin, the Rose Cafe was enjoyed before the group hit the road again. 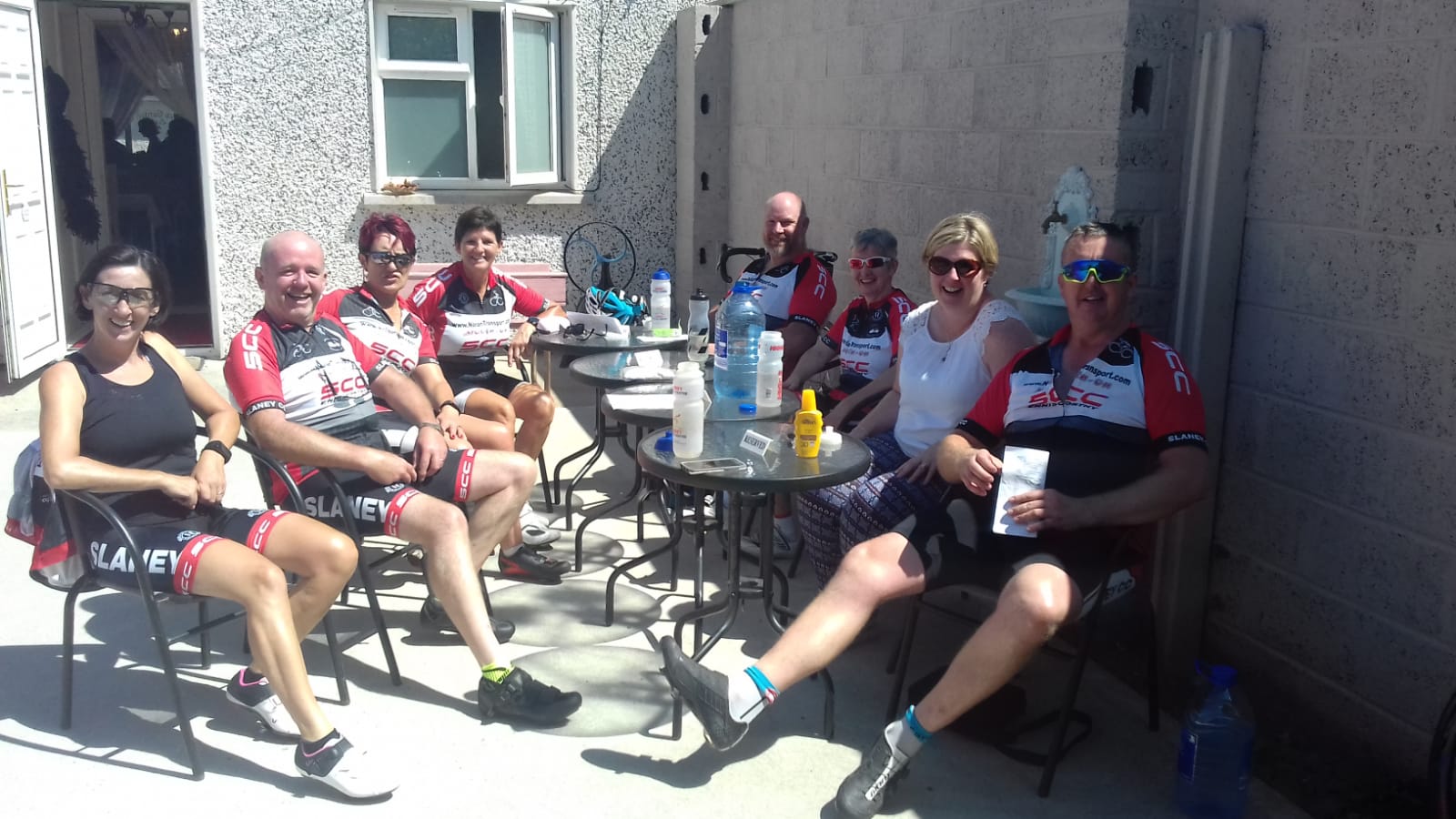 On arrival in Carrick, the brave souls that are Liam Harmon and Veronica Murphy went climbing Seskin Hill, the sensible Michael Furlong checked into the hotel, while Marie Cullen, Bernie Millar, Paul Campbell and Bernie went on to Kilsheelan to clock up an even 100km for the day. An evening of great fun ensued in the Carrick Hotel with everyone having a great time! 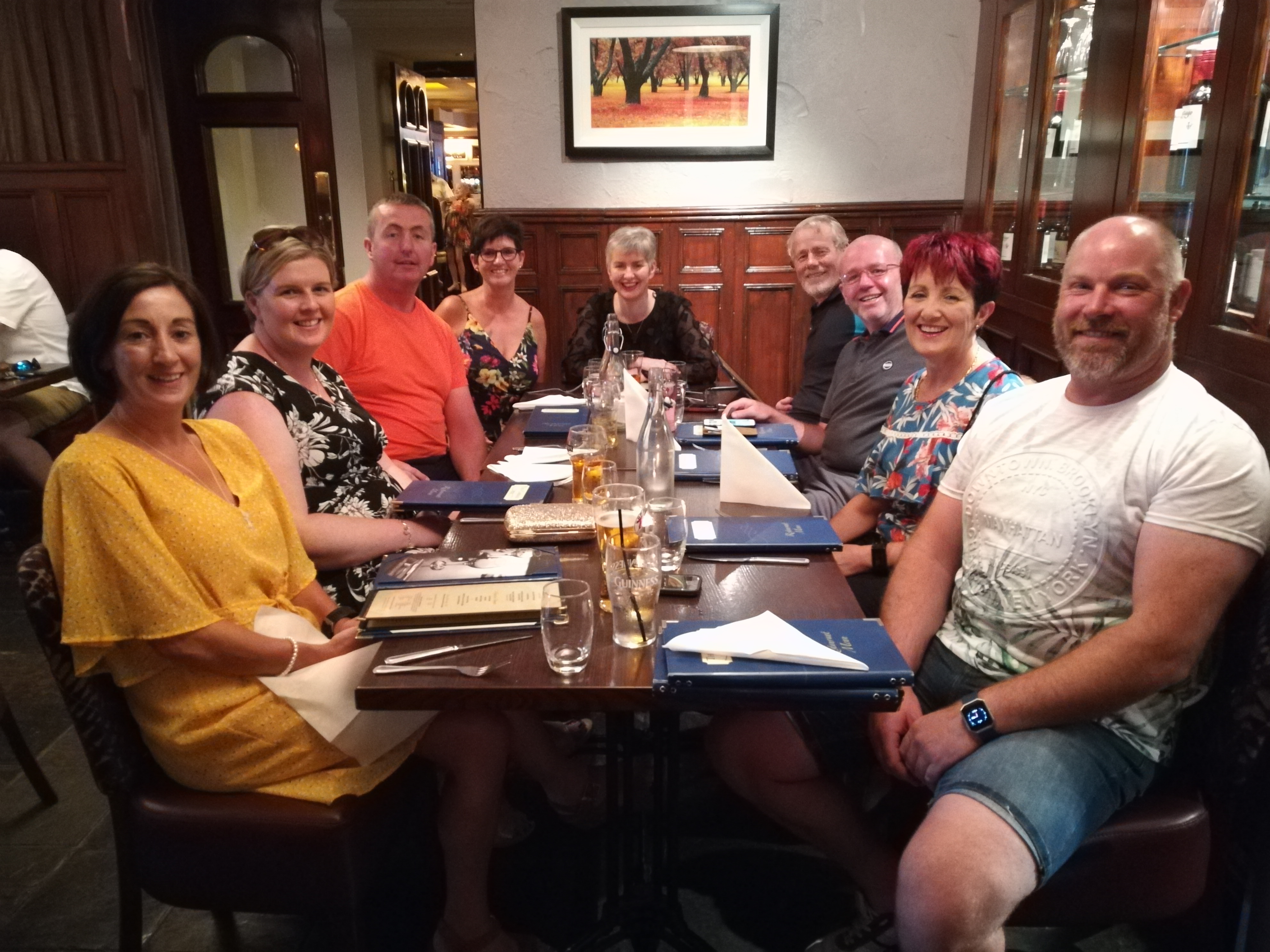 The group made their return journey in wet conditions the following morning but it didn’t dampen their spirits! Everyone made it home safely without incident and are looking forward to planning a similar weekend in the future! 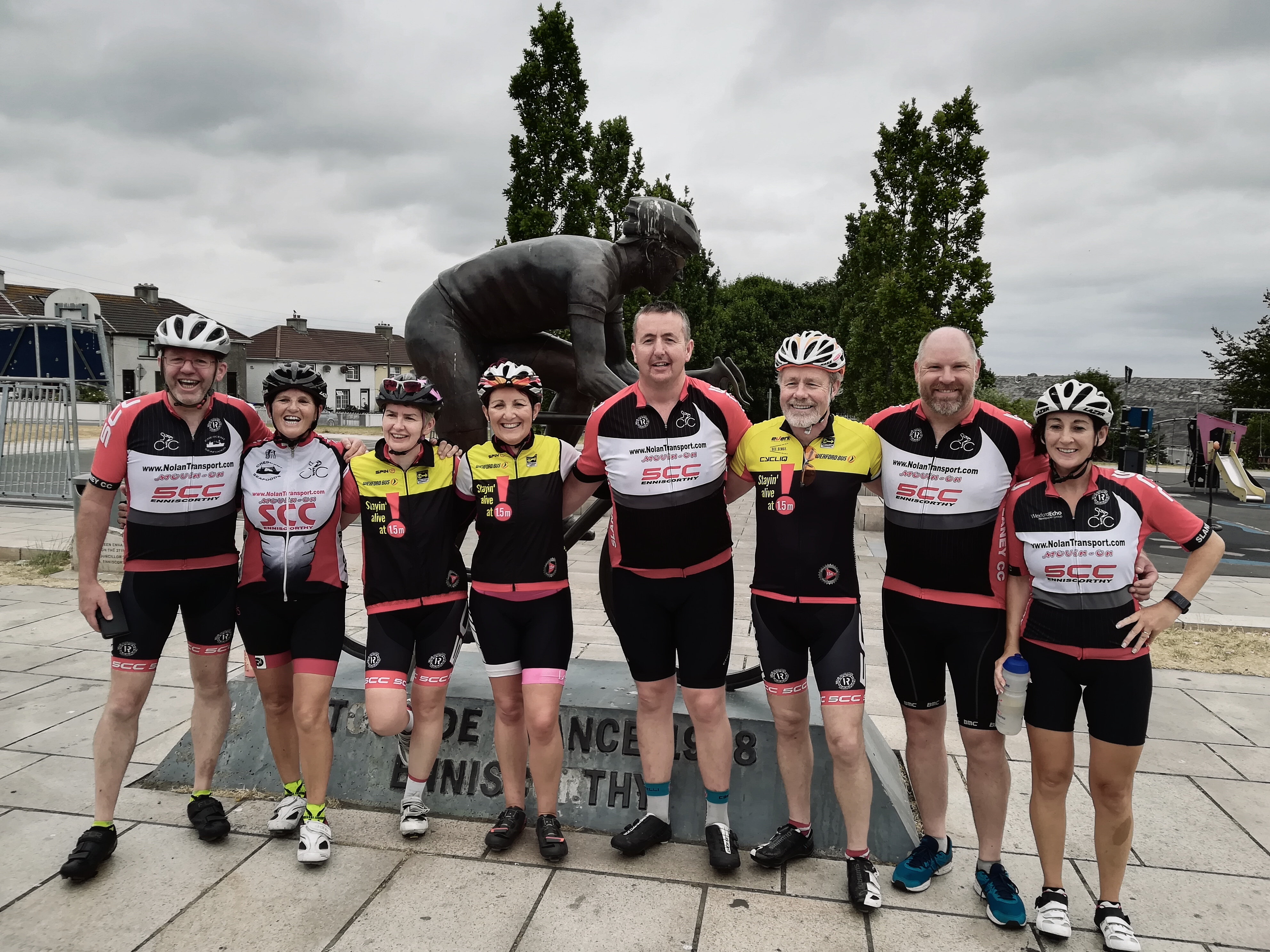 Phil Skelton’s Cork bound group had a similarly great time of it on Saturday. Their route took in New Ross, Waterford, Mooncoin,Carrick on Suir, Dungarvan, Youghal, Midleton and finally Cork city. We took in the great Seskin Hill en route and gave it a good go! The group battled through a strong headwind for most of the day but worked well together to finish the 193km route in a good time. 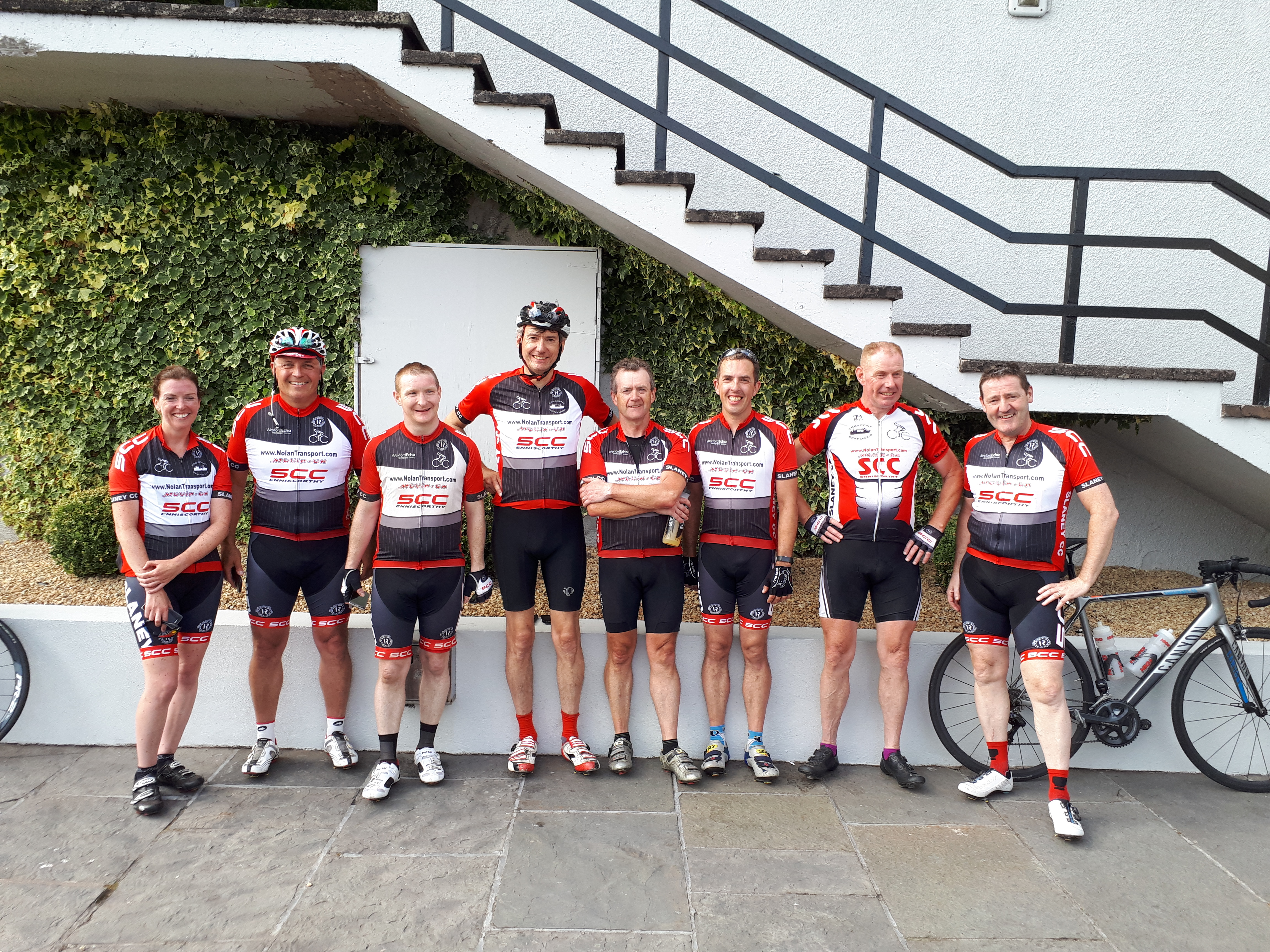 Paddy, Murry and Mark had to head back that evening so it left Phil, Gillian, Derek, Mick and Rob to hold the fort at the hotel that evening. We were joined by Ann Skelton who brought our bags which was a huge help to us. A great night of fun was had by all.

Phil decided to make the return journey early the next morning (05:30) so that he could get home to see some match involving 22 lads chasing a ball in Russia! A group of four riders (Mick, Derek, Gillian, Rob) set off after 8am and got home in 6 hours in poor conditions involving lots of rain and slippery roads. A weekend total of 370km+ was cycled by the five that made the down and back journey … sore legs but great memories!

Well done to everyone who went to both Carrick and Cork, its a great achievement, enjoy a good rest…