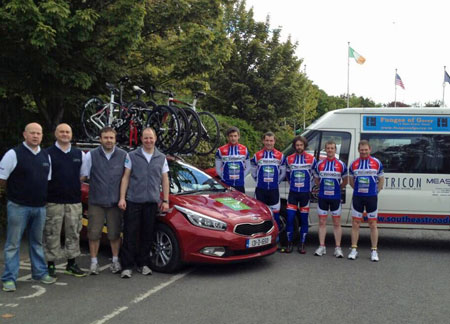 To complete a Rás is to join an exclusive group of cyclists who have earned the respect of their peers. Its part of Irish cycling history. A rite of passage that only the strongmen can pass. To compete for eight days against professionals, semi professionals & full time amateurs, and against the elements over heavy roads and mountain stages is a unique achievement. To be a “Man of the Rás” is an honour hard won.

It’s a daily fight for survival over distances you never normally race and at speeds you can only dream of. Every one suffers at the Rás from first to last. Maybe it’s that ability to sustain the suffering that separates the top 10 from the bottom 10.

To take this challenge on for a clubman, a county rider or an A3 or A2 is to take on a world of pain. Committing eight or nine months of your life to training, preparing, putting you life and family on hold. Building up slowly and steadily to a week in May. Knowing that even on your best day your going to be struggling in the gutter just to survive against the competition. Suffering.

For riders to take on this challenge and then to be eliminated from the race after a stage which included eight categorised climbs and in which you finish just 81 seconds outside the time limit seems like cruelty in the extreme. For the officials to overlook the extenuating circumstances and exclude these riders seems to go against the whole ethos and history of the Rás.

Hugh, Dave, Brian, Greg & Nick, and their superb support team took on the challenge. Not as talented or highly ranked as the competition but equally committed and well prepared. Leaving the race in this manner must have been as hard as any stage. Still suffering. Respect.