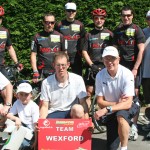 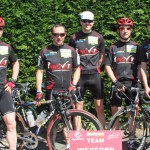 Day 2 – another eventful day on the Ras with the first ever abandonment of a stage after a bad crash. None of the Wexford riders injured. All riding well today and were comfortable in the main group until the crash which took place after the main climb of the day. Good spirits and looking forward to tomorrow.

Day 1 over – Very hard, very hot, very fast. Went thru 30 bottles on the day! As expected pro teams broke race into 5 or 6 groups on the road.  Riders tired and in bed by 10pm. Team car 1 overheated on stage so had to switch cars halfway thru stage. All in good spirits. Will Byrne best finisher on the day. Stuck a few photos up here: http://pix.ie/liamr/album/377364

When we started discussing a Wexford team in the 2010 FBD Insurance Rás last November it seemed like a long time away but this Sunday we wish Alex Williams and Murt Doyle the best of luck as they take to the start line as part of Team Wexford/Innovate.ie cycling squad. This is the first Wexford representative team for many years and its great to have two Slaney riders as part of the team.

There’s probably a good book to be written on the comings and goings of the last six months but the important thing is a Wexford team will be involved and set down a marker for future teams. It was great to see 8 or 9 riders have the courage to put their names forward for selection and commit to the training and financial demands of riding the Rás. The riders, and management team of Derek Webb and Pat Whitney, put their lives on hold for 6 months to make this venture a success.

Despite the huge advancements in Wexford cycling over the past few years it was always going to be a tall order to get 5 Wexford riders of the requisite quality to May in full fitness. With Slaney’s Frank O’Leary breaking his arm and Frank Dunne crashing out of Rás Mumhan the two most experienced Rás riders in the county were lost. Then Martin Gill, another experienced Rás man, was forced out in the last few weeks with a knee injury. In the end, like most county teams, Wexford have had to import a few honorary Wexford men.

The additional riders are Keith Gator from Comeragh CC in Waterford. Keith is a strong A1 rider who rode a great Rás last year. Odhrán Connors from Orwell Wheelers is a strong climber whose Rás prep included winning the Orwell Wheelers hill climb title last week. The final rider is another hardman of the Rás Will Byrne from Kilcullen/Murphy Surveys. The team is undoubtedly stronger with the addition of these riders and we wish them well.

Management team for the week includes team manager Derek Webb, director sportif Pat Whitney while Martin Gill will now see the Rás on four wheels. The team have 2 team cars and a team van for equipment and luggage. Thanks to Patsy McCaffery for use of his team car and also for negotiating sponsorhip of the van from DSS Van Rentals. The team has numerous smaller sponsors who will be acknowleded on the Team Wexford website. However the main team sponsor will be Innovate.ie , a leading independent provider of IT infrastructure.

It was very important that all the work put in to date has resulted in a Wexford team in the Rás. Hopefully over the next few years even more riders will come through who wish to ride Irelands most important bike race. Most importantly for the future Team Wexford will continue after the Rás with a team in the junior tour. Don’t forget the Rás crosses the Corrobutt gap next Friday at about 12.40pm (fastest time) and is due to finish in Gorey at 13.42pm (fastest time). Please support Team Wexford!