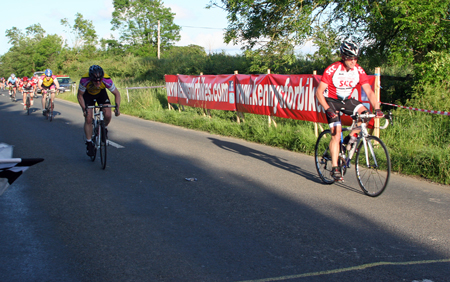 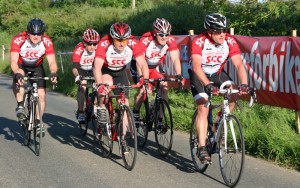 Despite a shorter handicap tonight the limit novice group went into work mode from the off and worked super hard for the whole race. Beginning with eight riders, by the bell the group was reduced to 5 riders, Mylie Kavanagh, Murry McDonald, Willie Roche, Phil Skelton with Mick Foley just off the back. This group had a 1 minute gap on small breakaway from the main group and another few seconds over the large chasing bunch.

With the main group normally pulling a minute a lap from the smaller novice group it was going to be touch and go for the now 4 man group to stay away to the finish. 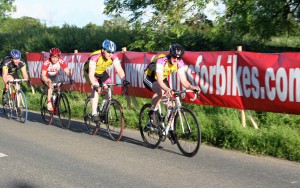 Starting the final lap Stephen Duggan is leading the chase….

The whole race came together after rounding the final bend with Murry McDonald taking a last ditch flyer just as the A4s arrived. With 150m to go he looked favourite to take victory but cramps in both calves forced him to stop peddling and freewheel to an eventual 9th place. Phil Skelton jumped out from his wheel and was celebrating with 50m to go but not realising that a super fast finishing Stephen Duggan was flying towards the chequered flag. Luckily for Phil his momentum took him across the line with a bike length to spare to become the first winner this year from the novice group. 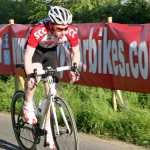 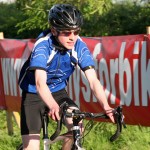 In the Underage wins again for Adam Thacther and Elliott Young but two great 2nd place rides from Martin Curren (your scratch next week Martin!) and Marc Thatcher who was impeded by a jeep on the back road and turned onto the main road a 100m behind Elliott and chased his heart out for the remains of the lap.

Many thanks to our 35 adults and 12 underage who took part, our lead cars and marshalls, our supporters on the line and finally thank God for some beautiful sunshine!