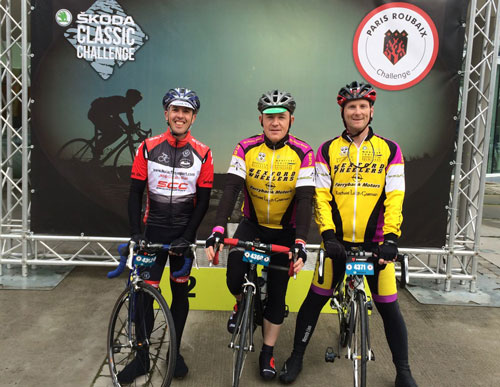 Slaney’s Rob Webster completed the Paris Roubaix Sportive last weekend along with two members of the Wexford Wheelers (Ian Doyle & Keith Cullen). The lads set off on Friday last from Rosslare to Fishguard on the ferry, drove across the UK, hopped in the Channel Tunnel and then drove up to Roubaix on the French/Belgian border.  The sportive started at the Stabinski Velodrome in Roubaix and took them across 32km of cobbles during the 145km course. 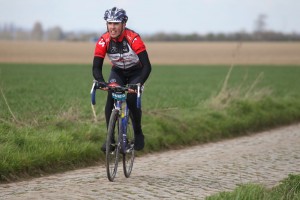 The first five star section of pave came after 45km at the Trouee d’Arenberg (2.4km) which was the worst road surface (if you could call it that!) that they ever encountered. They made it through this with the loss of just two bidons and managed to avoid any punctures! The next five star section came at Mons-en-Pevele (3km) after 91km where very strong headwinds and driving rain made for tough going where everyone had to dig in and grind out getting through it. The final five star section came after 120km at the Carrefour de l’Arbre (2.1km) where again the strong wind caused difficulty. 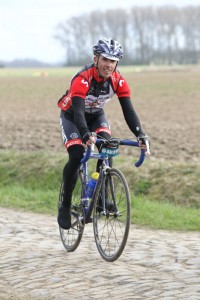 The sportive ended with a lap of the famous velodrome and the opportunity to use the famous shower block where the names of the past winners are displayed. Rob reckons that it was probably the hardest day he has spent on the bike but definitely the most enjoyable. The sportive is really well run and there is great camaraderie between the different nationalities with the Dutch being good fun in particular! 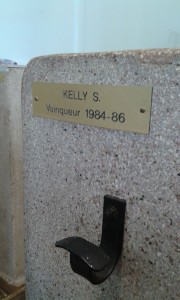 On the following day, the three lads cycled into Belgium and were amazed at sheer volume of people out cycling, the courtesy paid by motorists to cyclists and the provision of cycle lanes on every road. The love and respect for cycling and cyclists is deeply ingrained into the Belgian culture and it would be great if our own country could take note and learn from the Belgian cycling culture. 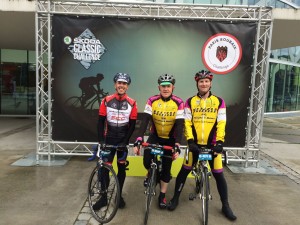