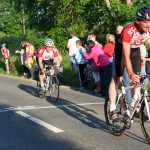 Slaney’s Alan Murphy returned to cycling action with a win at last nights novice league. The long months on the turbo in Kosovo obviously paid off!

NOTE: The next round will take place in one week, next Tuesday 22nd June on the Davidstown circuit. 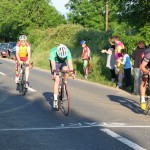 Also last night Rita Boyle was competing in the Wicklow Ladies league. Following her win last week Rita started with the scratch group this time. Having ridden through the various groups she jumped away from the scratch group but was unable to reel in the last few riders and finished third. Aishling Fitzpatrick from Slipstream won the race. Race report on the (very good) Womens Cycling Ireland site –  http://alturl.com/4tg5