Congratulations to Murt Doyle on a fantastic win for Slaney CC in tonights Ellen Construction Cup race which finished in front of a large crowd in Enniscorthy town centre. 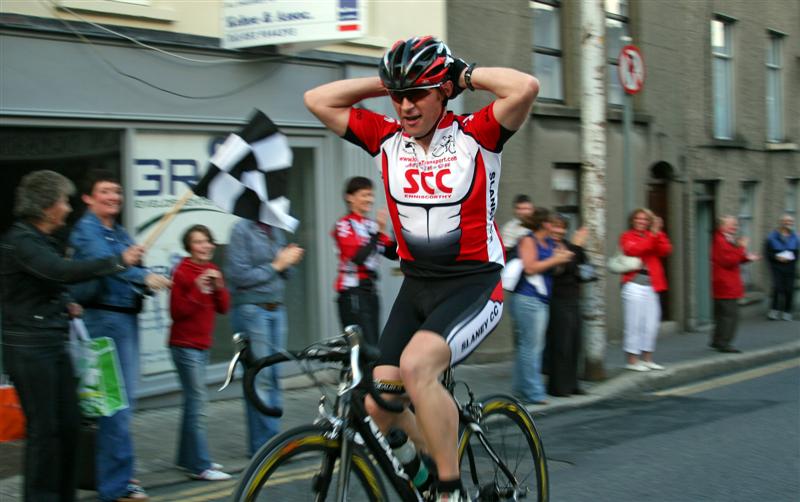 The 40km race was part of several cycling related events to mark the opening of the Strawberry Festival. At 6.00pm Sean Kelly unveiled a fantastic bronze monument of a racing cyclist at the Duffry. The statue was erected by Enniscorthy Town council to celebrate the 10th anniversary of the Tour de France stage in 1998. Following the unveiling the cyclists assembled behind the monument site and set off on a neutralised race start from the Duffry. While the race was underway Slaney CC ran their annual kids mini TdF races in the Market Square. In a rare double Murt Doyle’s daughter Aoife took first in the childrens race!

The main race then arrived at about 7.40pm with Murt winning on his own about 40secs ahead of 2nd placed Mark Driver before the prize winners were presented with their awards on the main festival stage by Sean Kelly . Both the race sponsor and the town council were very pleased with the inaugral running of the event and hopefully we will see more town centre racing in the future.

All at Slaney CC send our best wishes to Simon Lambert who crashed heavily on the descent out of Kiltealy. Simon was sent to Ardkeen and we wish him a speedy recovery.

Some more pictures of the various events on the night can be found by clicking on the “Strawberry Festival 2008” album at http://pix.ie/liamr/albums and scrolling through the images.