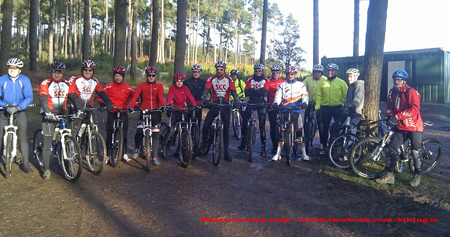 Report from Bill Jordan: A very big thanks to Mark Driver for organising a great day out in Wicklow today. Even though it was snowing as we were getting ready, yes i did say snowing, it passed off soon enough and we set out in very windy but dry conditions. Some of us had hired bikes and these were fine and gave no trouble.
We had a very big turn out from Slaney including Fionn and Ryan from the u14 team and, as we have come to expect from these lads, they had no problems getting around. We also had some riders from outside Slaney join us which led to a great group on the road or rather off road!
Mark laid out a mixture of up hill and down hill and wide lanes and narrow trails on a route that we completed twice. the second time around, as is normal with cyclists, the waiting was less and the speed more and resulted in some tired and sore bodies at the end especially Stephen Kelly as he took a very heavy fall on a rocky section and will at the very least need to invest in a new helmet but better that than a busted head!!
Following some, actually a lot of, muck removal about half of the group set out for the beehive and some well deserved lunch and the chance for us to tell our story of the day.
Again a big “go raibh maith agat” do Mark.