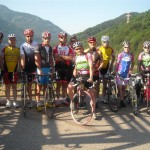 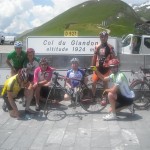 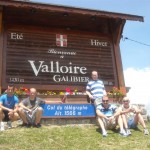 Saturday 3rd of July will always be remembered for  group of Co. Wexford cyclists. (and adopted cyclists, three lads from Kerry and Bart Glover from Dublin) The day they conquered the famous Marmotte cycle challenge. One of the toughest one day cycling events in the world.

With an early start of 07.30 am, and thousands of cyclists there from all over the world, we had to hit the road before 06.00am to get into the queue at the start line.

The start out of Bourg d’ Oisans was at 07.30 on the button, the first village after Bourg was Allemont. Cycling over the dam in Allemont was a sight to behold, looking down into the valley there were thousands of cyclists lined out as far as the eye could see. Allemont is also the start of the first climb, “Col de Glandon”, a long steady climb of about 25 km. Only half way up about 08.30 am the temperature was already over 20 celsius. The decent down from the Glandon was quite tricky to say the least. There were many casualties on the descent, the sharp hairpins came so quickly and with temperatures ever increasing and constant braking there was loads of tyres popping.

At the bottom of the Glandon there was about a 20km flattish section to the village of San Michelle de Marianne. The temperature was at 36 celsius cycling into the village and Frank O’ Leary was a welcome sight with food and drink provided from the back of the team van.

One climb down three to go.

The second climb is the famous Col de Telegraphe. About 1 km after San Michelle starts the climb of the telegraphe. This is about 12 km in length and temperatures were soaring. On top of the telegraphe, our hotel staff were providing a water stop which was also a welcome sight.

Two down two to go.

From the col de Telegraphe there was a 5km descent to the village of Valloire. A beautiful village with partly cobbled streets.  (Fair play to Cancellara, we wouldn’t like to be cycling too far on the cobbles). From Valloire starts the climb of the Galibier. This is a beast of a climb, 17km in length and a steepest gradient of 12%. If the other two climbs hadn’t taken it out of you this one would do the job.

Getting near the top of this climb there was snow on either side of the road. Temperatures reached their lowest on top of the Galibier, which was still about 18 celsius. With windbreaker on to keep warm? The descent from the Galibier was cool, we descended down to the Glacier hotel where Bernie Glover and Rose McCaffrey were waiting with much needed Pizza and bread rolls. The stop at this point was a life saver, many agreed they wouldn’t have finished out the cycle had they not got some decent fodder at this stage.

From here there was a 42 km descent back to Bourg d’ Oisans and nervous thoughts of facing Alpe Du Huez. An accident on the road held up a lot of cyclists just before the last tunnel before Bourg. In Bourg there was a last feed stop and a chance to fill up water bottles. A guess of the temperature here was close to 40 degrees Celsius.

The first 5 hairpins of Alpe Du Huez are really tough and after a long day in the saddle about as welcome as a fart in a spacesuit. There were people all along the road of Alpe Du Huez cheering everybody on, which helped a lot when struggling up the climb. As if it isn’t hard enough, there are markers on each hairpin to remind you how many are left to go. At the top of Alpe du Huez the finishing line was brilliant, with a large crowd of people cheering us over the line. An emotional finish to a lot of hard training that paid off in the end.