Many thanks to the 45 competitors who who took part in this mornings “race of truth” . Another great win for Davy Walsh and some fast times all down the field. It was great to see so many taking part in their first time trial.  You now have a time to beat next year after a good winters training! 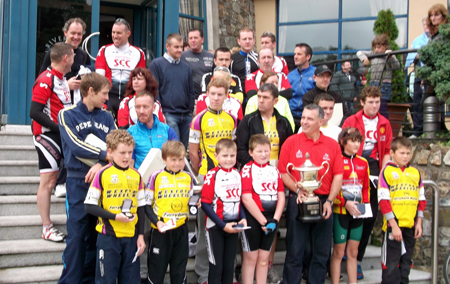 Thanks to Pat, Bill, Gabrial & Mick for help at the sign on, start and finish. (Thanks to Bill for the picture)

Today was the 11th anniversary of Eddie Tobins tragic and untimely death. Some may be unaware that it was just after competing in the James Butler Memorial that Eddie passed away. I came across the results sheet from that time trial over the weekend which I’ve uploaded below. It was on a dull day a bit like today but with the wind blowing in the opposite direction. (Which must have added about 3 minutes to the times as I’m sure I was comfortably in the 10 min bracket!). If Eddie was still around you could guarantee he would be at the heart and soul of events like todays TT. 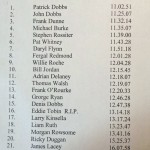 This Sunday sees the annual James Butler Memorial 5 mile TT take place on the usual Oylegate to Enniscorthy course. All clubs & categories, adult and youth welcome. Youth riders – no aero equipment , TT bars, discs etc., just standard road bikes.  No following cars please as its just too dangerous when riders are being overtaken however U12s can be accompanied on a bike by a parent or chaparone for safety.

Distance is just 5 miles (and half downhill!) so we are encouraging all our touring crew to give it a blast as well.

The story behind the event.

Every weekend in Ireland there are road races and events in memory of deceased Irish cyclists like Paddy Flanagan, Shay Elliott or our own Eddie Tobin who contributed greatly to the sport in different ways. I asked Pat Whitney to write a few words about the story behind this event and its a unique piece of Irish cycling and social history thats almost been forgotten.

The James Butler Cup was presented to Rosslare Road Club c1987 by the late May Walsh in memory of her father, James Butler. May lived in Kilrane not far from the old school which was used as our Club House, complete with kitchen, workshop, toilets and of course running water and electricity! She dropped in occasionally and it was obvious she had a passion for cycling and the gift of story telling.

As soon as May appeared the kettle was plugged in.  The u/age lads at the time, Stephen Duggan, Michael Griffin, Conor Barry, Brian O’Hagan, Brendan O’Gorman along with fifteen others loved to see May arrive. Peter Connick would down tools in the workshop and we would all gather round as May recalled a time trial or a track race she won somewhere in Munster back in the 1950′s. It was a time when cycling received a lot of publicity due to the Ras Tailteann and the names of the top Irish cyclists became household names. It was also a time of few cars and rough roads but grass track racing proved very popular.

We were amazed as she spoke about the journey by tandem with her father to Carrick on Suir or Clonmel to compete in a grass track meet. These races were often held at half time in a big hurling game with the track marked out on the edge of the pitch. May and her father Jim would set out after first Mass on Sunday morning. Jim would strap May’s track bike complete with cane wheels to his back.  (The wheels can be seen mounted on the wall in Bertie Donnelly’s Pub in Dunshaughlin Co. Meath). May carried her racing gear and food for the day in a bag on her back.

With May steering on the front they headed  to their destination without stopping (for a can of Red Bull or espresso coffee!). On arrival they would have something to eat. Jim would get her track bike ready while May prepared for the upcoming races. Win or lose it was straight back home after tea and sandwiches, often arriving after 9pm. ‘It wasn’t always sunny either, we got many a drenching’ she would laugh. This was repeated every Sunday.  Carrick one week, Kildare the week after. May’s first love was time trialling and won medals at the National 25ml and 50 ml TT C’ships. She was very successful on the track and was known throughout Leinster and Munster.

Like all the great cyclists of her generation she was a great believer in training on a fixed wheel over the winter months.  Just ask Roy Doyle! She spoke with great fondness and admiration of her father Jim.  They had a great relationship, something like Katie Taylor and her father Pete. It was a great privilige to have known May.  On the bike she was a champion of the road and the track, off it, a humble and genuine person.

The James Butler Cup is a race that every Wexford cyclist should strive to win.