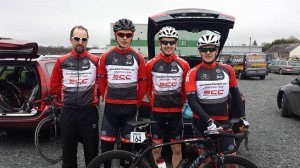 Didn’t have time to update the website over the weekend but hopefully many of you have been following the Facebook updates on the lads progress. All in all a succcessful weekend with a big step up in terms of distance, pace and the quality of the opposition for our youngest ever team at the Gorey. As a development team they did very well and hard races like this will stand to them in the future. They avoided the numerous crashes and a small improvement in the TT would have seen Fionn & Reece finish in the top 20. Saturdays stage of 130kms was run off at over 42kph (faster than the stage in Rás Mumhan on Saturday!) and when serious vets like Sean Bracken consider it the hardest Gorey yet you can bet it was tough.

Saturday Stage 1 Report: lads all safe but tired after todays stage of the gorey 3day. no results yet but fionn was in the main bunch, reece just behind and ryan in a group a bit further back. a tough day for all and at 130km the longest race that our lads would have ever done. looking forward to tomorrows tt in the morning and road race in the afternoon which will be 4 laps of gorey, craanford and camolin. thanks to liam, conor and roisín in the team car, bernie in the back-up car and corky in craanford, well done to all

Sunday Stage 2 & 3 Report: mixed day for the lads at the gorey today, the lack of training due to illness finally caught up with ryan and he had to abandon on stage three. disappointing for him and the team especially as he had even moved up a few places after the morning tt. reece and fionn had a very good day and both managed to move up in the g.c. following this mornings tt. in the afternoons stage they both finished in the main bunch on the same time as the winner. thanks to bernie, richard, ann and john for helping out today and roll on tomorrow.

Monday Stage 4 Report: reece and fionn lined up for todays stage four of the gorey in good weather and good spirits. the stage went from gorey back to blessington via tullow and it covered the more than 90km at an average of more than 41kmh. the lads were comfortable all day and were not involved in the only crash of the day with 3km to go and finished safe and well in the bunch sprinting for the win. first gorey in the bag and not even a flat tyre, well done lads. thanks to nicky, ann, bernie and especially ryan who, although out of the race, turned up to support his team mates. also thanks to the committe of slaney cc for the support they have given the lads. for me it was with great pride that i watched on this weekend as these young lads worked hard, performed fantastic and were a credit to there club and familly, very, very well done

The Hope & Dreams 10 mile/10km road race ( http://www.hopeanddream10.com/ ) take place next Sunday in Enniscorthy. The organisers have queried whether we would have 6 cyclists to act as bike marshals to ride along side the runners as a warning to approaching vehicles or walkers and generally assist in keeping the event safe. We have done it it a few times in the past and its a good way to help the charity and still get in a bike ride. Start time is 10.15 but volunteers would need to be at the Promanade around 9.45/10am.

With the longer evenings some of the club members are meeting on Tuesday & Thursday evenings at 6.30pm at the Duffry for either a few laps of Davidstown or an hour or so spin on the main roads. Time will probably go back to 7pm as the evenings get brighter. Probably the best way to organise who is in or out would be to use the Facebook page and let people know who will be out. The more people know about the rides the more people will turn up so use the club facebook page https://www.facebook.com/SCC.IRL and select Slaney as you club on Strava  https://www.strava.com/clubs/slaney-cycling-club