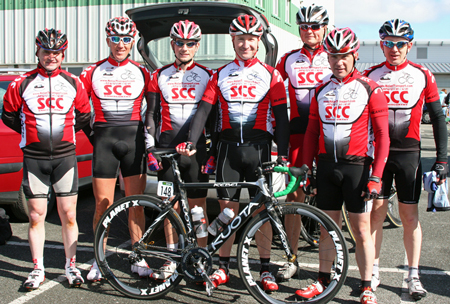 Well done to the entire Slaney team who had a great weekend at the Gorey 3 day. Guest rider Paul Flynn took 3rd and 8th place stage finishes and leapt to 5th overall on final GC. Murt Doyle finished 9th in the stage 2 TT. Mike McLean came into the race on anti biotics and with low expectations and did a great TT and finished comfortably high in the bunch each day. Mark Driver was hardly able to walk over the weekend with a hip problem that required a vist to a spinologist on Friday evening but rode strongly each day and finished in the bunch today despite an early puncture. Shane Kelly was unluckiest rider of the week with a broken spoke on Kilcavan hill and a puncture near Poulaphouca today meaning he dropped time on both stages while riding really well. Pat Dobbs rode tirelessly in support of his teammates while Dan Szczech rode well until illness forced him out on stage 3. The strong performance had the team in 4th place until todays breakaway upset the GC and sent us down to 7th.

It wsa great to see so many Wexford riders in the mix over the weekend and special mention to Luke Maguire WW who had a great finish on Saturday and who crashed yesterday and also John Maguire SERC who also hit the deck on Saturday.

The team had great support from team manager Stephen Kelly, Alex Williams, Ken Blanche, Rita Dempsey &  Mick Byrne. Thanks to Gerry Hanratty & Derek Webb from SERC who came to our rescue with transport and also Dave Maguire who offered assitance. Thanks to anyone who supported the team from the roadside and especially underage riders Elliott and Reece Young who cycled from Arklow each day to support the team.

Murt, Paul and Mick were our best finishers today. Murt is now 5th in A3 category standings at 17secs, team is joint 7th @ 31secs – all to play for in tomorrows TT. Shane was unlucky to break a spoke and needed a wheel change with the pace up on Kilcavan hill, Pat and Dan were caught behind an early pile up and struggled to get back on while Mark continues to ride thru the pain barrier with treatment required on an injured hip. Thanks to Stephen and Alex in service car, Ken for massage and bottles and Ryan & Conor for keeping me company!

Many thanks to Derek Webb and Gerry Hanratty from SERC who have saved our bacon with the transportation problem today. Much appreciated. Like last year Derek has extended an open invitation to Slaney, Barrow & Wexford to use his house as a base between stage 2 & 3 rather than drive home or be hanging around. (He’s a brave man…)