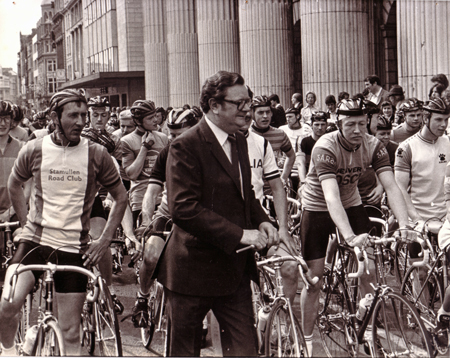 Rás start outside the GPO May 1983. Slaneys Pat Whitney (Garda Team) lines up with Gay Howard from Stamullen on the left and Wexfords Charlie Heterich in the background. The Wexford team was  J. Allen, C. Heterich, M. Gurhy, S. Darragh, A. Ryan and M. O’Donoghue. Bernie McCormack won the stage from Carrick on Suir to Wexford and Philip Cassidy won the overall victory.

Some feedback and new information about the above photo in an email from Ger Campbell;

Howya Liam
Just seen that great photo of Whit and Howard on your website. I’d sat you’re spot on with the year but its not the ras.
The ras in ’83 was the ”dairy ras tailteann”and all the teams received kit from the sponsors with dairy ras tailteann printed on the jerseys.I’d be 90 per cent sure that this is the start of the old coast to coast 3-day that used to be sponsored by Calor Kosangas.

Its a bloody great photo to get your hands on though. If you look over Whits shoulder and see the jersey with LIA as the last three letters on the front. thats Davie Cassidy who won the Gorey 3-day some 28 years later. Behind Howard partially obscured is the son of the very famous Ben Mc Kenna [Paul].Some things never change though as Howard is still as ugly as ever ha ha.

The MC on the ras in those days used to call Whit the ”lonely guard”. He was never too lonely as I used to be with him most days. Stage finished in Courtown one of those years and the peleton put Whit up the road going through Davidstown to let him lead through Enniscorthy. They used to do these nice things in them days.
Cheers Ger Campbell

Its good to see someones looking at the website (even if they are in Drogheda)!! I remember standing on the Railway hill near Paul Nolans bike shop and watching the Rás come through Enniscorthy that day with Pat about 30 secenods ahead of the peloton. Unfortunately no camera with me in those days.