I recently came across a pile of result sheets and league tables from the 2003 and 2004 season. With so many new guys coming into cycing in Wexford in the last few years some of ye might be interested in where the resurgence of Wexford cycling sprung from. For those of us who took part its good to remember the “fun” we had riding 50 mile league races with three laps up that damn drag on The Dirr circuit! Its good to see many of those on the 2003 sheets are still involved in some way.  I scanned the results below from the six events and also the final league tables.

The big numbers taking part in cycling events in recent years, and the way the county can sustain five strong clubs, is a fantastic development that has its roots back in 2002/3. At that time there was only a handful of Wexford cyclists taking part in open events and very few local events. A series of time trials organised by Slaney’s Eddie Tobin with Pat Whitney in Enniscorthy in 2002 was a catalyst for the Wexford Wheeler’s Frank O’Rourke & Pat Geoghegen etc to take on an interclub league in 2003 consisting of three time trials and three road races. The TT courses are still being used while The Dirr circuit was used for the road races and provided a stiff challenge with much smaller groups on the road than in todays league races and no place to hide. 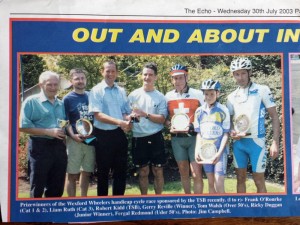 Frank O’Rourke took on the administration of the Wexford Wheeler leagues and had a backroom team in Ferrybank Motors calculating  the most exact  handicapping system ever devised by man with every individual rider having their own handicap worked out per second per mile and recalculated after every event! I doubt the guys who write algorithms for Google could have worked it out. Before any of the clubs had websites the results arrived printed in a brown A4 envelope after each event.

When you see the calendar of open races, leagues, 2 days and sportives that the clubs provide in Wexford now you can see why we are the envy of many counties. Keep supporting the events and keep it going. Eddie Tobin & Frank O’Rourke would be proud of their legacy.