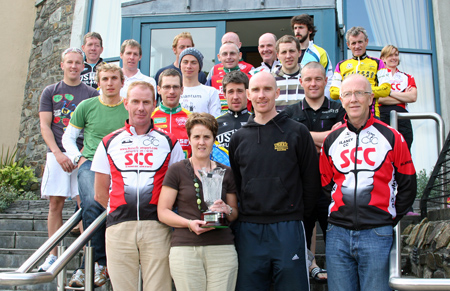 Linda Tobin with winner Neil Delahaye and other prizewinners outside the Riverside Park Hotel, sponsor of the the race.

Congratulations to Neil Delahaye(Usher IRC), winner of the 2009 Eddie Tobin Memorial Road Race and to Conchubhar O Crualaoich (Wexford Wheelers) winner of the combined race today. Some pictures from combined race finish below. (I’ll have to figure out a way to drive the lead car AND take the race pictures!)

The races were held in very testing conditions with strong and gusty tail wind for the first half of the race and an equally strong and gusty block headwind for the return leg! The two races averaged over 50kph for the first half of the race with the breakaway in the A/B race reaching speeds of 70kph as we hit the Gorey bypass and riders losing contact as they were unable to sustain the pace. At Ferns, with 10kms to go Robin Kelly (Comeragh)and Neil Delahaye(UsherIRC) looked the strongest at the head of the race and Kelly launched a fierce attack on the climb through the village. However Delahaye latched on to his wheel and as they crested the hill and turned for Enniscorthy attacked himself forcing Kelly back to what remained of the break. Fully committed, Delahaye now time trialed his way to the finish and although the last uphill kilometre into the gale slowed him down, he took the solo win in convincing style. Team mate Daniel Kirwan (UsherIRC) was second, followed by the Dan Morrisey duo of Mick Fitzgerald and Mark Power. “Super Vet” Rory Wyley chose to ride the A/B race over the combined and finished 7th after a hard chase to cross from the main group to the break.

Vets also proved the strongmen in the combined race, taking the top three places with Wexford Wheelers Conchubhar O Crualaoich taking a hotly contested uphill sprint from Sean Bracken (Usher IRC) followed closely by Andre Engemann (St Tiernans). Again the high speed on the outward leg seemed to be the deciding factor as the race broke into several smaller groups before turning for the last 50kms into the wind.

Thanks to Linda Tobin, our sponsors The Riverside Park Hotel, The 1798 centre, Enniscorthy, An Garda Siochana in Enniscorthy and Ferns, and our club members who helped at the sign on and prizegiving and who drove service cars and marshalled the  event.