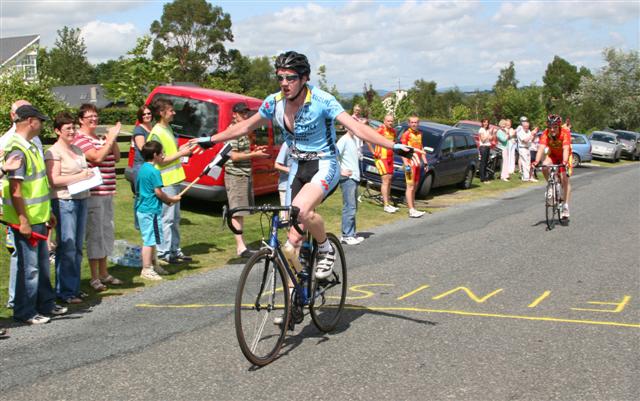 With summer finally arriving in Wexford almost 100 riders signed on for the 4th Eddie Tobin Memorial Road Race in Enniscorthy. With either 6 or 4 laps of the undulating circuit to complete under a hot sun it was always going to be survival of the fittest.

In the A/B race the strongest proved to be local man Cathal Redmond, (South East Road Club) who followed his recent win the Betty Darcy Memorial with another fine win, when he beat Comeragh CC’s Keith Gator into second on the finish line at the summit of Whites Hill. Daniel Kirwan took third at the lead group split on the final ascent.

The combined race was taken in a convincing manner by Kevin Shelly (Dan Morrisey’s) who attacked his 10 breakaway companions on the third lap and quickly built up a 40sec lead. Although the chasing group appeared to be coming back to him on the final lap he had plenty left in the tank and won on his own with Martin Mizgaski (Wexford Wheelers) second and Jason Stack (Usher) third. Shane Kelly (Slaney CC) was first Junior while Jenny Fay (Sigma Sport) took first lady.

The Riverside Park Hotel were sponsors of the event for the fourth year and 23 riders were presented with cash prizes by Slaney CC Chairman Paddy Dunne with Cathal Redmond also receiving the Eddie Tobin Memorial trophy from Linda Tobin.

Slaney CC would like to thank Linda and Rachel Tobin, race organiser Pat Whitney, our sponsors The Riverside Park Hotel, our Commisaires Eddie Dawson and Larry Farrell, Marie and Liz on the finish line, our many marshals who ensured the safety of the riders and the public, Pat, Sinead and Cian Power from Comeragh CC for their assistance on the day and Larry Mittan and Wexford County Council for their work during the week filling in the potholes!

(Some more pictures of finish at http://pix.ie/liamr/albums  )