Thanks to ace camera man Terry Dempsey for the above video: if the link doesn’t work try this one:   http://www.youtube.com/watch?v=PbYzV1bU-F0

Huge disappointment for Paul Bolger who crashed in the last 20m of the A4 race while sprinting for 2nd place. Paul was taken by ambulance to hospital in Kilkenny with a suspected broken wrist and I understand he was transferred to Waterford for an operation in the morning. Everyone at the club sends best wishes to Paul for a speedy recovery.

Paul had been riding strongly throughout the race which was blown to pieces over the tough climbs after Castlecomer. A number of riders ran out of road on the super fast technical descent  on to the Kilkenny road. While sprinting for second place we think Pauls pedal clipped one of the traffic cones just before the finish line bringing him down hard. Bill Jordan punctured after less than 5 miles and chased hard through the cars while Ken Blanche and Mick Mclean lost contact with bunch on the drags before Castlecomer.

Dan Szczech raced well to finish safely in the main bunch in the A3 race with Shane Kelly, Stephen Kelly and Camin Ruth behind.

Alex and Murt were in what was left of the chase bunch on the final lap of th 145km A1/A2 race, a couple of minutes down on the breakaway group. Murt later lost contact but finished in the group behind Alex. Alan Galavan was still suffering from the chest ailment he’s had for several weeeks now and failed to finish.

A few pictures from the closing stages of the A3 Race: Congratulations to Wexford Wheelers Conchubar O Crualaoich who took a fine victory in the A3 race beating Barrow Wheelers Greg Dempsey into 2nd place. 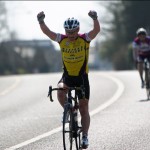 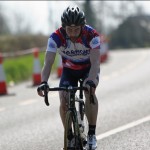 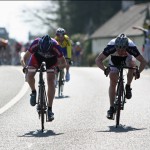 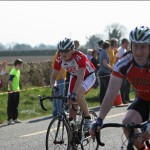