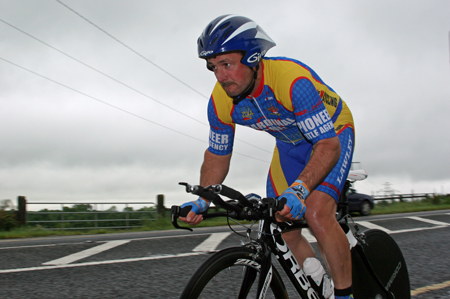 Eyes on the prize – Slaneys Davy Walsh sets off on tonights County TT champs where he retained his title with a superb time of 57 minutes and 13 seconds.  Full results on Wheelers site later and I’ll upload full set of pictures tomorrow. Well done to Dan Szczech (1st A3 we think), Phil Skelton and Ryan Byrne (Underage U14) 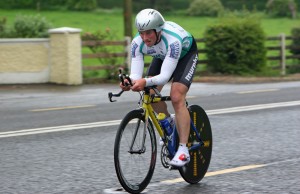 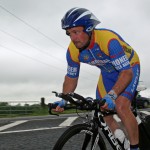 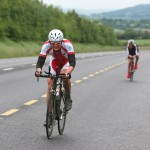 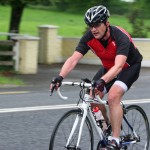 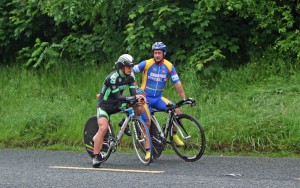 Unluckiest rider of the night? Martin Mizgajski punctured close to the turn when his front wheel clipped a cats eye. Joe Rossiter generously gave up his front wheel to Martin who finished the TT in just over the hour. 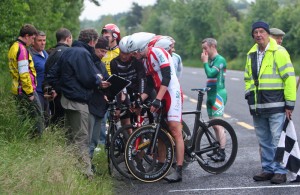 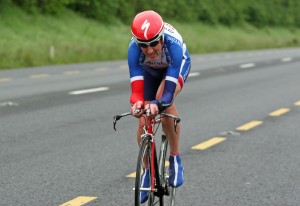 Best position? Don’t know the guest riders name but boy could he get narrow! 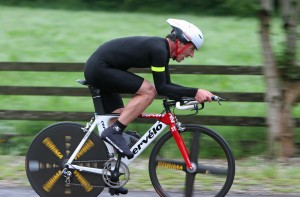 Liam’s favorite picture? Denis McCarthy heading downhill at speed. Another ten years practice and all my pictures will be this sharp.

Tuesday June 5th: County Senior Time Trial Championships will be held on the N25 New Ross/Wexford road. Sign on 6.30pm for a 7pm start? U16 and U14 riders will also be welcome

Mark Driver made the long trip to Donegal for the 3 day Rás Dún na nGall. Riding for Bray Wheelers it was a tough weekend in hard conditions. Mick McLean took 15th in the criterium in Blarney on Saturday night and had Frank Dunne to lead him out to 2nd in the bunch sprint in the Sunday race. Unfortunately the winning break and prizes were up the road at that stage. Also out in terrible conditions on Sunday were Ger Leacy and Tonto Brady in the A4 race in Swords while Bill Jordan rode 160kms in the wind and rain at whats acknowledged to be Irelands toughest sportive in Carrick on Suir.