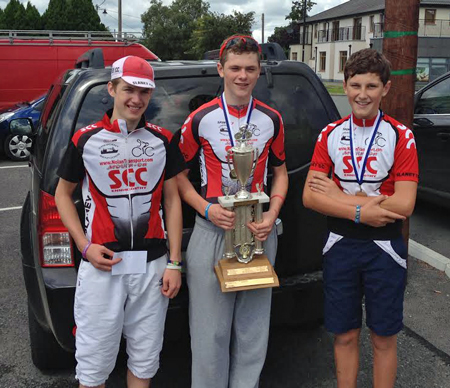 Update: Under 13 Elliott Young was the Slaney star on Saturday but just outside the medals taking 5th place in both the TT and the RR. In the U16 TT Reece Young finished 20th with Fionn in 23rd. The RR saw both riders make the race winning break with Reece finishing 8th but a recurrence of a knee injury saw Fionn having to stop before eventually finishing 21st.  Well done lads.

Hoping for a safe and successful weekend in Ballymoney, Co Antrim for the Fionn, Reece & Elliott at the National Underage Championships. The lads have had a great season so and have taken wins and placings around the country including the Leinster U16 Gold medal and U14 Silver medal a few weeks ago. Elliott will have another year at U14 next season but Reece & Fionn will be juniors and frightening the A3 bunches out there!