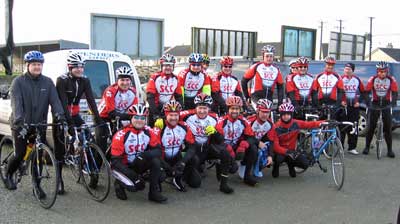 The club had a great turnout yesterday of 28 cyclists between the Barrow Wheelers event, the racing section and the tour. 19 riders took part in the Barrow event and John Busher was on hand with camera to capture the Slaney crew. Despite the cold east wind the ride attracted almost 100 cyclists from Leinster and Munster.

With a good group of racing cyclists taking part the pace of the front group was a steady 30/32kph and Slaney were well represented in this group with the first riders home at about 1.20pm. Us ordinary mortals took a little (lot!) longer to complete the rolling and twisty course. Well done to Barrow on a great event.