Slaney CC wish the very best of luck to Frank O’Leary and the Irish junior cycling team in the World Champs in Florence tomorrow. Frank has been coach to the junior squad for the last few years and the team have had great success and take on the best in the world on the tough Firenze course tomorrow. Frank rode for Bray Wheelers and for Slaney for many years before his work with Cycling Ireland put his own cycling on the back burner. 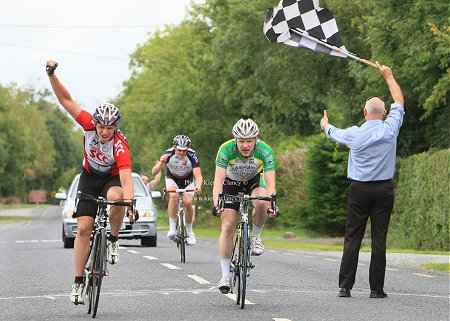 Frank winning stage 3 of the Charleville 2 Day in 2010

After some doubt over numbers the good news is that the Barrow Wheelers Grand Prix goes ahead on Sunday. Its the last road race of the season as far as I know and is open to A2/3, A4 and underage so hopefully they will get a good turn out. The Barrow lads are good supporters or our open races and leagues and we hope the event goes well. 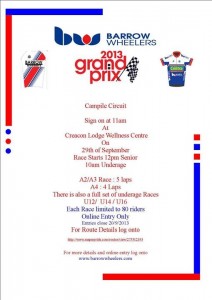 The following Sunday will see the final Slaney event of the summer, the annual James Butler Memorial TT from Oylegate to Enniscorthy. We’ll post details later but most likely a 10am start with sign on in Oylegate and prizes in the Riverside afterwards. Usual detail – Open to the usual clubs and all catergories €5 sign on and underage free as normal.

For underage the usual TT arrangements apply – normal road bikes and wheels only – no fancy aero gear! No following cars please as its just too dangerous when riders are being overtaken however U12s can be accompanied by a parent or chaparone for safety.

Distance is just 5 miles (and half downhill!) so we are encouraging all our touring crew to give it a blast as well.