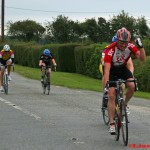 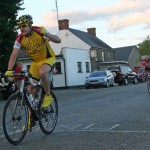 One of the wonderful things about our sport is the ability to keep riding competitively well after the normal ‘retirement’age for many contact sports. There are many examples of veteran riders being more than a match for their younger competitors. In the revival of cycling in Wexford over the last 10 years Pat Whitney & the late Frank O’Rourke were prime examples, who gave riders half their age a lesson or two. Two recent local performances have also fully illustrated this.

Paddy Dunne took victory in the A4 race in Camross last week but secured an even better result earlier in the month by achiving a Gold medal standard performance in his age group in the ultra tough Marmotte sportive. With four massive Alpine climbs we all know how hard this event is but they don’t come any harder than Paddy!

Wexford Wheelers Dave Allen has been back in the sport a few years now. Last weekend he was first man over Mount Leinster in the Ferns sportive and this weekend he lined out in the Suir Valley 3 Day. This race has almost become a mini Rás with professional riders and teams from abroad competing. While he didn’t take home any silverware he put his wheel on the line against younger and fitter men and will come out even stronger.

These performances didn’t happen by chance and there are no short cuts to performances like these. Paddy & Dave, like Pat & Frank before them, put in many hours of blood, sweat & tears to achieve their goals but they should be great examples to anyone coming back to the sport or just starting out. You are never too old, and never too old to improve!