Update from Peter: Adam was racing on Friday with Dion McCarthy in Holland. The two of them were getting on great, got in a break with two other lads but unfortunately, Adam crashed. But, the good news was that at least Dion came 2nd. Adam did a bit of damage to the bike but thanks to Jannick (Tim Schuller’s friend) he put Adam back on the road again. His helmet and top also suffered. But another great reason to wear a helmet ! It saved Adam’s head ! He had some road rash and was going to get back on but was told not to as there was not much point and his wounds had to be attended to. There were only three laps to go as well.

Today, Adam went on a solo break but the bunch reeled him back in. According to Martin O’Loughlin, the heat was unreal..40deg ! Poor Dion was shattered and suffered from it and was unable to be up there this time but Adam came in 6th place after. He has had a great time. The care and attention they have received has been second to none. Tim Schuller has been like a second dad to the two lads. He had friends there also to help care for them and take them out training during the week. They got to do cyclo cross also which they loved. They are having a barbeque now and heading to Germany tomorrow to the Velodrome. They fly home late tomorrow night. 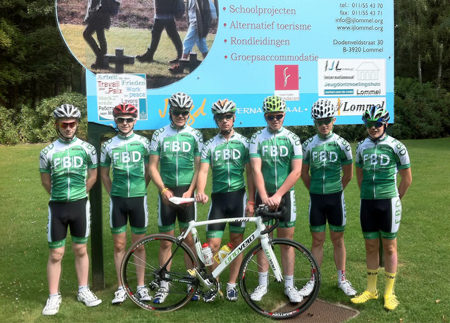 Slaneys Adam Thatcher flew to Amsterdam on Monday with other members of the U14 & U16 FBD Ireland Talent Team 2020 for a training and racing camp.

The U14s will ride single day races in Holland and Belgium during the period. The U16s will train in Holland before and after riding the Vattenfall Cyclassics stage race in Hamburg from August 16th to 18th. The trip will then conclude with a training day in a velodrome in Germany. Cycling Ireland development coaches Martin O’ Loughlin and Frank O’ Leary will accompany the FBD Ireland Talent Team 2020 at the camp.