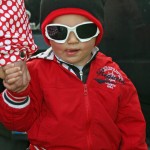 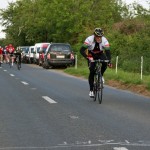 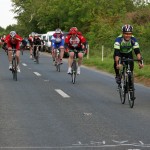 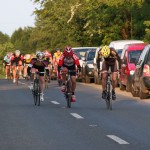 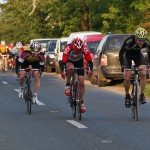 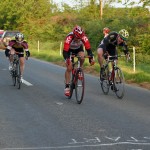 Not for the first time the hardy boys from Kilkenny arrived in Wexford and took the spoils! Well done to Micheal Barron and Joe Ryan from Marble City Cyclers who took 1st and 2nd tonight with teammate Brendan O’Reilly 4th. Peter Thatcher was 3rd as the semi limit group worked well together for all 5 laps and made sure the scratch group took back very little time.

Another tweaking of the handicaps saw a very competitive race with the groups only coming together at the end of the final lap. One rider however managed to survive from the limit group to stay ahead to win on his own. David “Corky” O’Connell spent almost all the race on his own after braking away from the limit group and managing to hold a 30/40 second lead for about 3 laps. In the end he crossed the finish line only about 20seconds ahead of a storming group led in by Stephen “The Dark Warrior”Kelly, Nick Coughlan, Paul Bolger, Mick Walsh, Tom Lucas, Tonto Brady and Eoin O’Shea. I’ll update the league table when I get the sign on sheets from Pat.

The underage racing was as competitive as ever with a great first time win for Billy Cooney from Liam Stamp, Elliott Young, Darragh Jennings, Marc Thatcher and Gary Walsh in the U12 event . The U14 race went to Ryan Byrne ahead of Craig Collier, Fionn Jordan, Adam Thatcher, Reece Young, Neil Kelly, Cormac Redmond and Odhran Stynes.