Another good night for cycling in Wexford with 32 adults and 15 underage riders turning out on a dreary evening that turned dark and miserably wet by lap 3 of 5. Well done to all who turned out and in particular to everyone who marshalled, took numbers, counted laps and got a proper soaking tonight (I struck lucky by driving a lead car tonight!). In particular thanks to the lads from Wexford Wheelers who come up every night to marshall, to the parents who drove lead cars and the riders who couldn’t race and turned up to help marshall or do some coaching. With such big numbers racing we still need more club members to help and give a break to those turning up every week.

The groups were tweaked a bit by Pat to ensure fairer racing but by the final lap the race had come together with the exception of Emmet Ronan who took full advantage of his start in the limit group to stay away on a solo effort and win by about 20 seconds from a charging pack lead by Paul Bolger, Joe Rossiter, Stephen Kelly, Eoin O’Shea, Peter Thatcher, Mick Byrne and in eight place Phil Skelton. 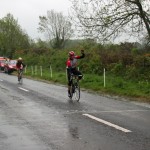 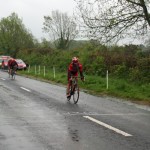 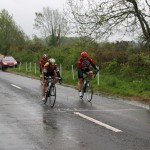 The underage racing proved to be another battle of tactics this week with the wins going to the riders who put their heads down and went for it while the scratch goups were spending time working out their race plans! In the 2 lap race Fionn Jordan took his 2nd win in a row followed by Odhran Stynes & Neil Kelly. Marc Thatcher stepped up from the half lap race to win the 1 lap race from Liam Stamp and Elliott Young.  Chapau everyone!