Thanks to everyone who turned out today for the 2009 Mount Leinster Challenge. We had about 160 riders sign on with most completing the shorter route but about 40 riders completed the full 140km. With all variations of rain on show from light mist to plain persistant and on to torrential downpour together with a galeforce headwind it was a “survival of the fittest” type of day. However we also had some sunshine (we have photographic evidence!) and most people tell us they’ll come back again next year.

There are a number of people who make the day special and we need to thank especially Ann, Phil, Mary, Liz and Avril who ran the feed stop in Kiltealy like clockwork. Each year the girls put on an amazing spread of freshly baked food and the amount of work that goes into it on the day and in the weeks beforehand is incredible.

Paddy Redmond from the Red Cross has been associated with the event from the start and is equally willing to assist at medical and mechanical emergancies! We are indebted to his prompt assistance on the mountain today when a cyclist became ill and after rendering immediate assistance he liased with doctors and ambulance crew before returning to his postion manning the course. We wish a speedy recovery to the gentleman who became unwell.

Thanks to everyone who assisted in anyway from marking roads, to sign on, to parking, motorbike marshalls, feed stops and, on a day of many mechanical breakdowns, to Eamonn, Colin and Frank in the service car/van who had a particularily busy day. 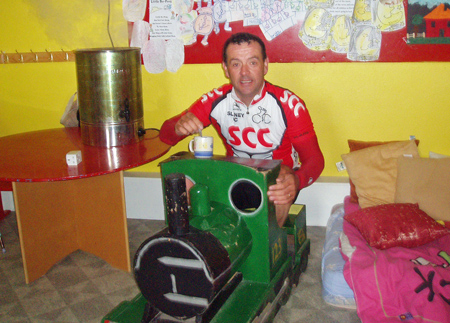 Stephen Kelly showed his age and had to take the train home on Saturday!! How long until he will have the free travel